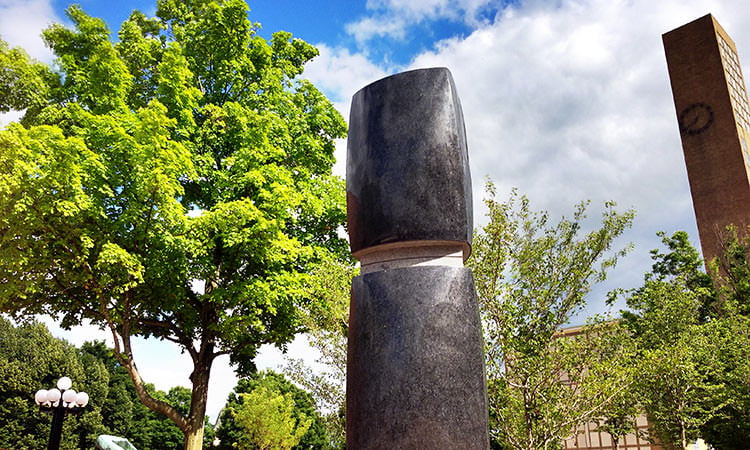 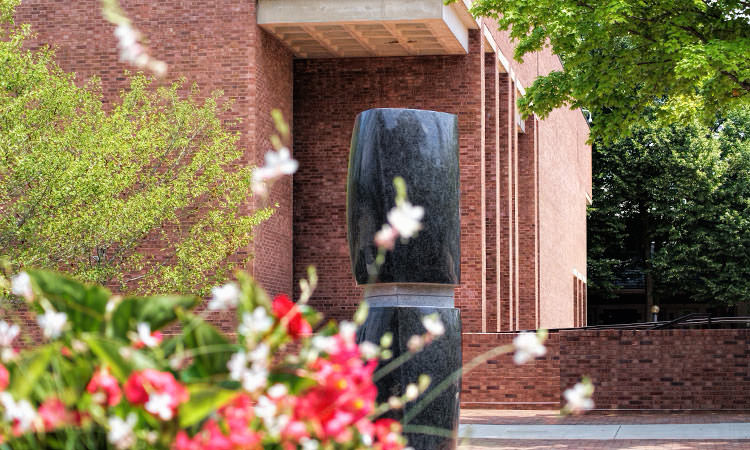 Library Plaza, between Visitors Center and Library
Map it

Columbus sculptor Martin Beach created the 8,000-pound mesabi black granite, which came from a Babbit, Minnesota quarry. The sculpture is an obelisk form consisting of two stacked, black granite stones, creating a modern and minimal interpretation of a totem, an ancient symbol of community, gathering, and family. “At the same time, I am implying that extension of the vertical infinite, creating an upward swirl of motion that forms a fluctuating visual energy,” said sculptor Beach. “My hope is the sculpture is not interpreted as a static and stoic form, but one that is very much alive.” The library’s stone steps came from the same quarry as these granite stones. 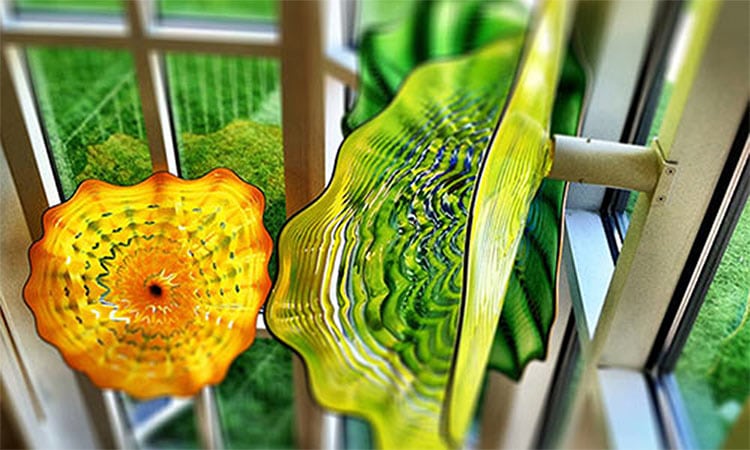 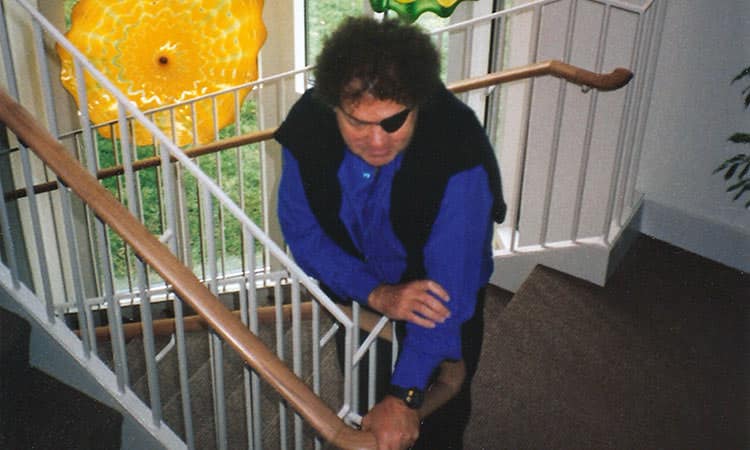 Persians, a common form used by Seattle glass artist Dale Chihuly, are visually fascinating with their curious old-world influence and powerful use of color. The hand-spun glass plates are installed within the two-story bay window surrounding an open staircase at the Columbus Area Visitors Center. Installed alongside Chihuly’s Yellow Neon Chandelier, the Persians were a gift from J. Irwin and Xenia Miller in 1995.

The second photo is of Dale Chihuly, when he visited the Columbus Visitors Center in 1996. 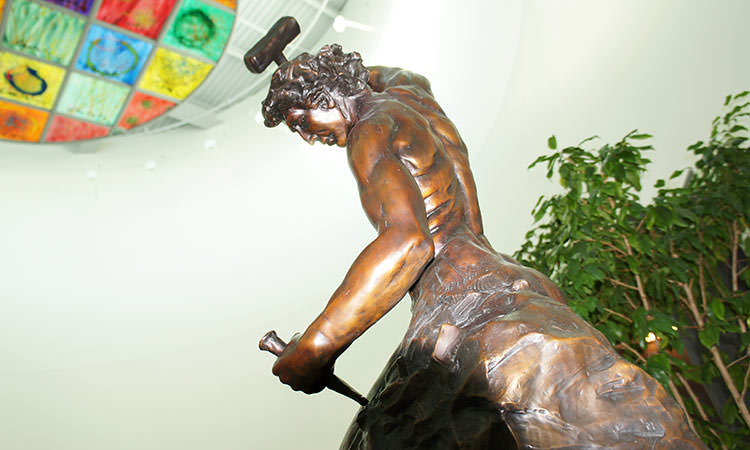 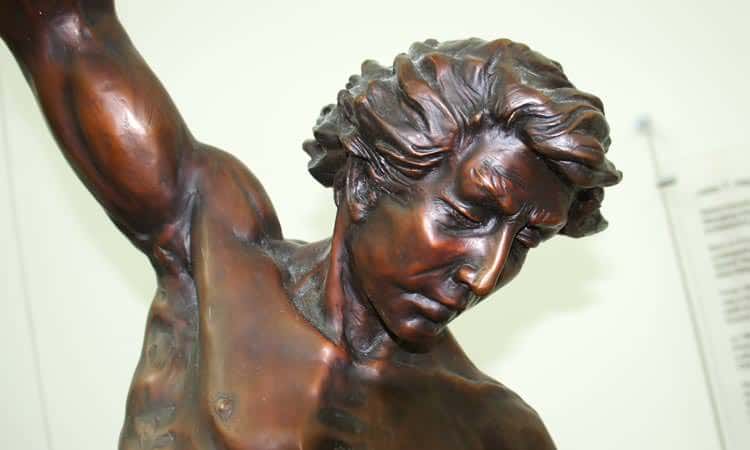 A bronze sculpture that was created by Colorado artist Bobbie Carlyle. Located inside the Learning Center. 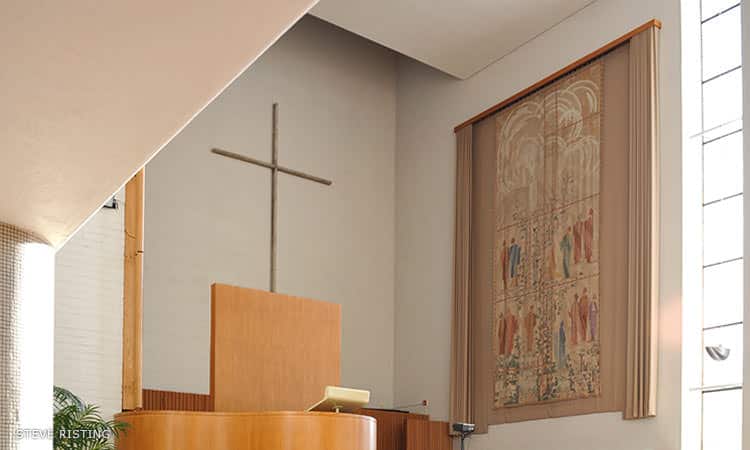 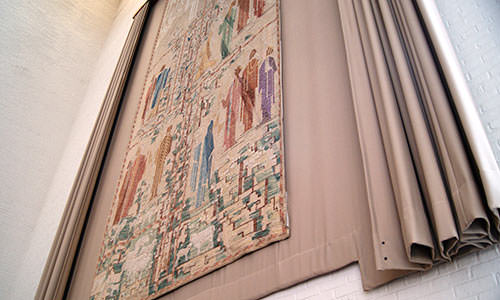 Sermon on the Mount tapestry, Eliel and Loja Saarinen

The Sermon on the Mount tapestry was designed by Eliel and Loja Saarinen, woven by Loja Saarinen and a group of weavers at the Cranbrook Academy, and installed in 1942. The tapestry depicts 13 colorfully-robed people stand amongst vines and branches with birds, sheep, and other animals. They gaze up towards Jesus who has many arcs and halos irradiating from him. It hangs in the sanctuary to the proper left of the large wooden cross. When it was installed, it was the largest hand-woven tapestry in the United States.

The tapestry is approximately twelve feet by twenty nine feet, it was refurbished in New York City in 1992.

Loja Saarinen, wife of Eliel, established Studio Loja Saarinen at Cranbrook in 1928. She managed the commercial weaving studio until 1942. The studio created textiles, much of it for Cranbrook, including rugs, window treatments, and upholstery fabrics for Kingswood School Cranbrook (a school for girls founded in 1931) and the Saarinens’ Cranbrook residence. The studio’s primarily Swedish weavers used a traditional Scandinavian ryijy technique, hand knotting tufts as they wove. 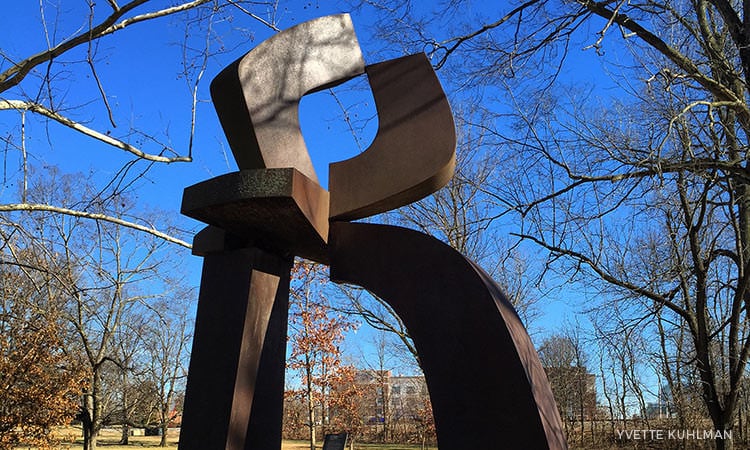 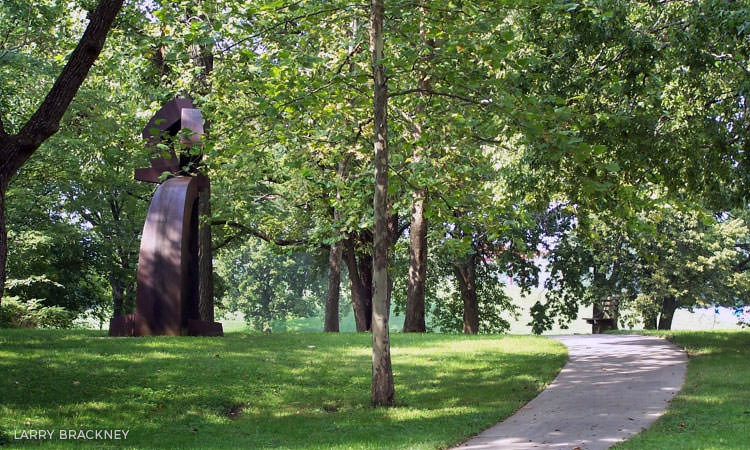 Created by local artist, Rick Bauer, Skopos translates as “the watcher” in Greek, the name selected through a local contest. During the flood of 2008, the one-ton work floated away (it hadn’t been secured to its base since it was so heavy) and was found downstream weeks later. Bauer returned to Columbus to oversee the restoration and re-installation. Bauer also created “Cannon,” located in Donner Park. 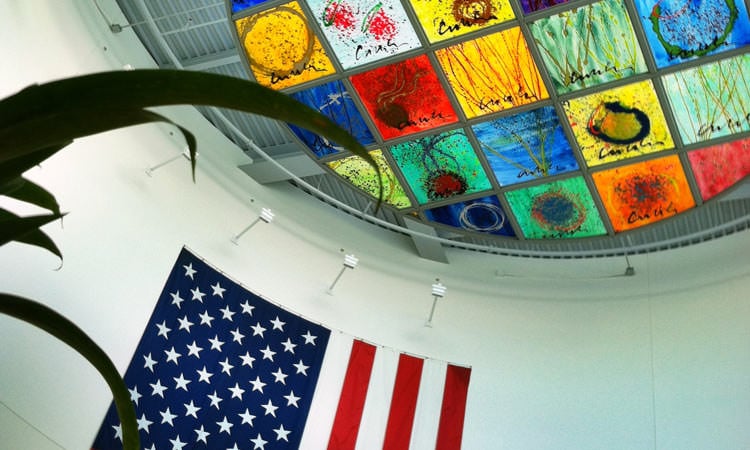 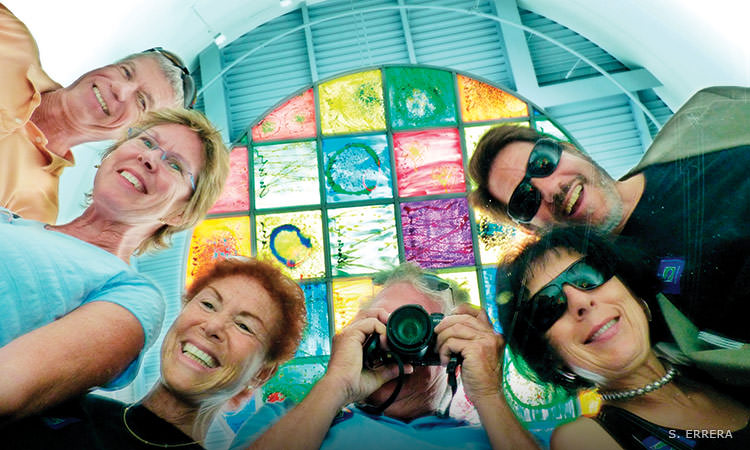 Sun Garden in Suspended Circle was created by artist Dale Chihuly, who painted and signed each of the 32 plexiglas drawings positioned inside a round skylight and backlit by the sun. Each drawing depicts one of Chihuly’s series. Any Chihuly fan will want to make the quick trip to the Columbus Learning Center, where this unique artwork is on view. The piece was commissioned to fit the unique space. 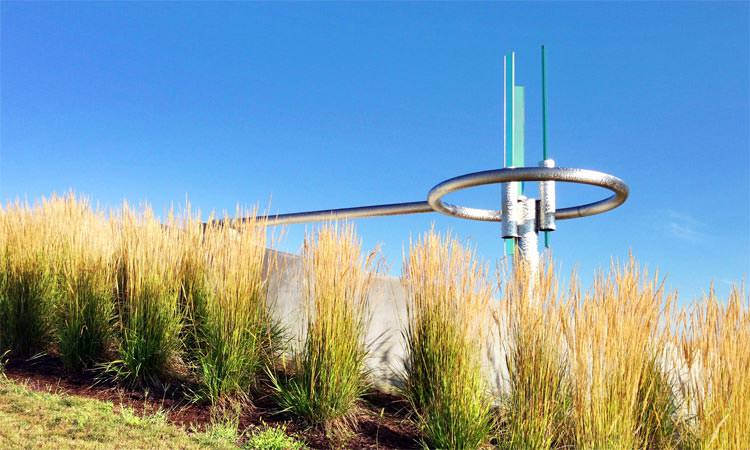 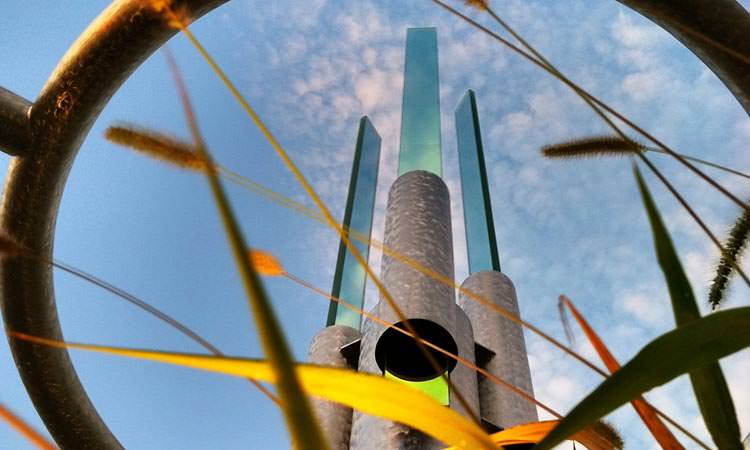 Created by artist Howard Meehan, Transformation is a stainless steel sculpture with three pillars of lighted glass and a polished steel ring. The surrounding concrete wall features a quote by Benjamin Disraeli. Meehan said the three panes of glass represent life, liberty, and the pursuit of learning, as well as the collaboration between IUPUC, Ivy Tech, and the City of Columbus.

Meehan said, “The benchmark is so high in this little community. I talk to a lot of architects, friends of mind, and they are very envious of me doing a project in this community because it’s such an outstanding place for art and architecture. So I’m very proud to have a piece here, very very proud.” 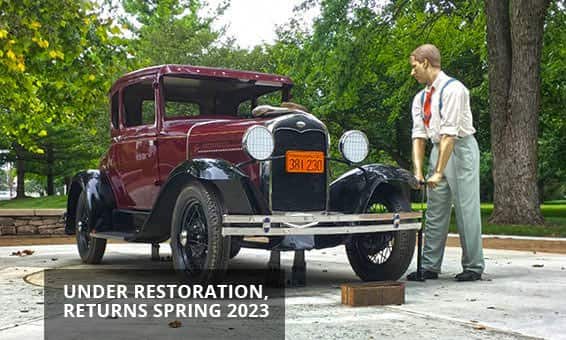 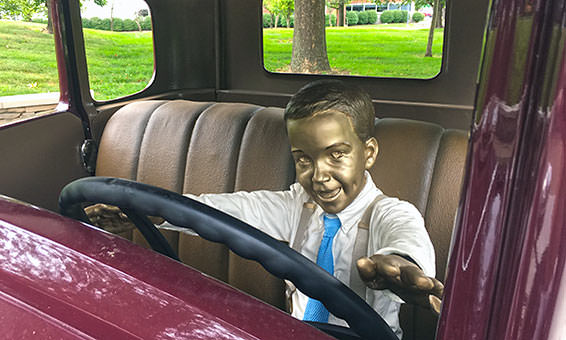 When I Was Your Age, J. Seward Johnson Jr.

[ Currently being restored – will be returned Spring 2023 ]

Located behind the Bartholomew County School Headquarters on Central Avenue, at 1526 13th Street, Columbus
Map it

Created by J. Seward Johnson Jr., this piece was commissioned by Arvin for display in remembrance of their very first product, a tire pump. Cast in bronze, the clothing on the human figures is actual clothing preserved using a patina and lacquer process that the artist developed. 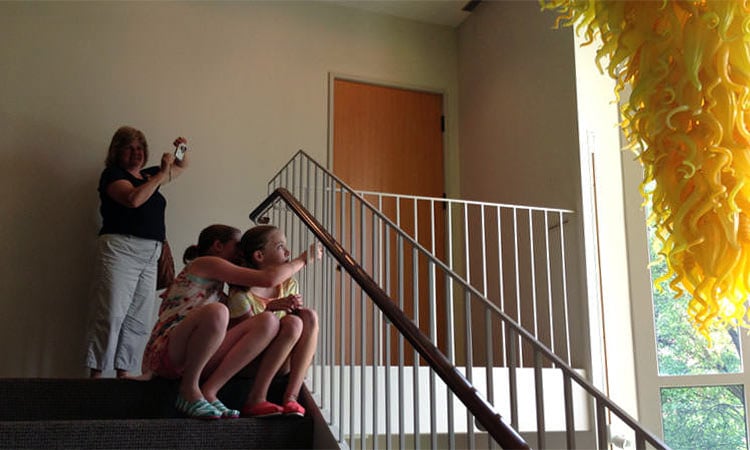 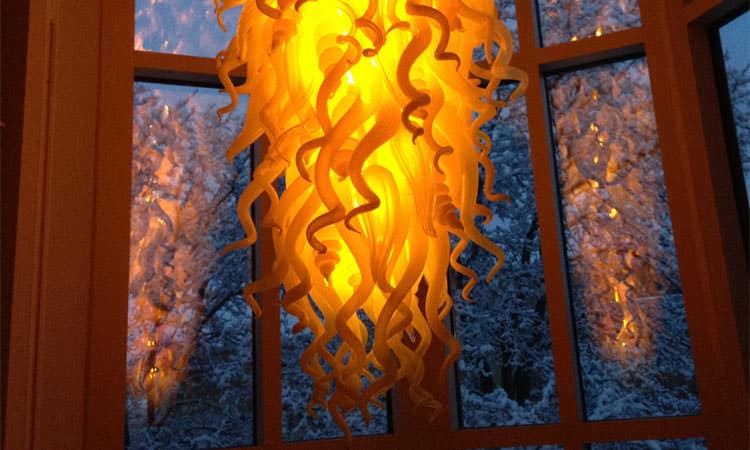 Yellow Neon Chandelier, by artist Dale Chihuly, contains 900 hand-blown elements in shades of vibrant yellow. The installation is nine feet tall and six feet across at its widest point. It has 50-feet of neon and weighs 1,200 pounds. 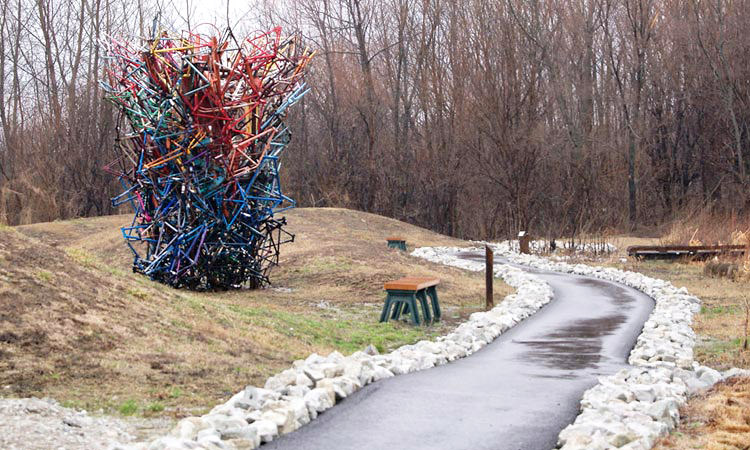 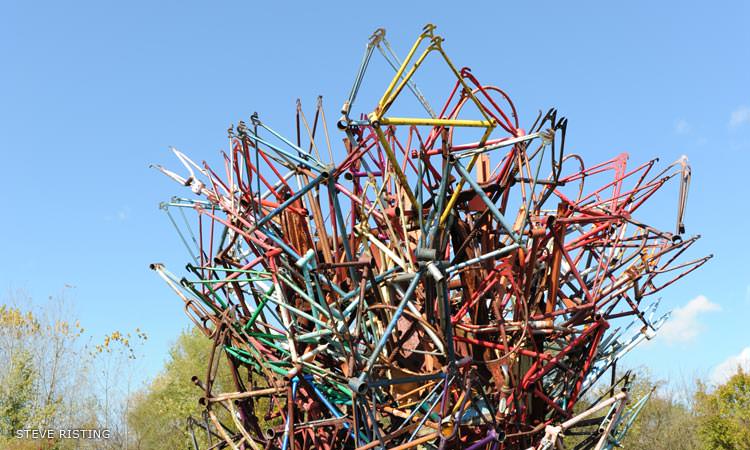 Lucy Slivinski assembled this on the lawn of City Hall in 2006, and it now resides at the Columbus Recycling Center. The piece incorporates scrap metal found locally and bike frames from Chicago, her hometown. The name was inspired by fungal formations seen by the artist while she was hiking in the Yellowwood Forest near Columbus.