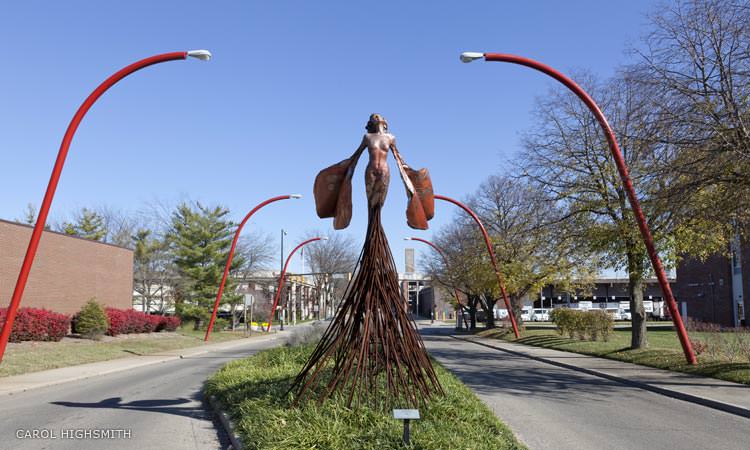 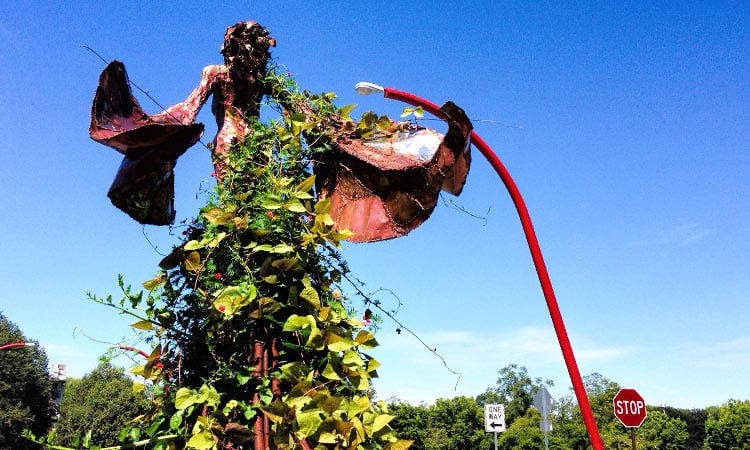 5th Street Median at intersection of Brown and Lindsey, Columbus
Map it

Created by artist Dessa Kirk, who completed the project in Columbus in the Brand’s Lumber warehouse. Eos’ arms extend into anthropomorphised leaves, which are made of welded sections of painted metal. Originally part of the 2006 Sculpture Invitational, the piece was so popular with the community that a fund drive raised the money to ensure she had a permanent home in Columbus. In Greek mythology the winged Eos was the goddess of the dawn, and rose from her home at the edge of Oceanus, the Ocean, dispersed the mists of the night and opened the gates of heaven every day so her brother, Helios, the sun, could ride his chariot across the sky. Generally depicted as a supernaturally beautiful woman, her tears were considered to be the morning dew. The sculpture faces west as if Eos is rising with the sun from the eastern horizon.

Comments made by Dessa Kirk about her connections to Columbus:

Columbus is this awesome place, because it’s this architectural Mecca.

Think about Cummins, they have these diesel engines and it relates to me personally because I grew up smelling diesel fuel every day, all the time. My grandpa washed his hands with it sometimes because it got the dirt off. The physical facility is this great courtyard. All these people have to look at it. So my sculpture is interacting with people. It’s a very solitary place and at the same time there’s a lot of focus going on from a lot of different places. And then the diesel engine is incredibly masculine and then you have my sculpture and it’s masculine but it’s really feminine, really powerfully feminine, and I like those two things together. And just the organic nature of that courtyard is just over the top…

Columbus, Indiana has all these amazing buildings by amazing architects that were commissioned by Cummins. The one great sculpture, the Henry Moore, I want to be in the same city as Henry Moore, why not, it’s a beautiful thing. Beautiful city in a beautiful setting. You want to see great architecture, go there. There’s New York City, but Columbus is where you want to go. And there’s great sculpture, my all-time favorite sculptor, Tinguely. I want to be a part of that, I want to be there hanging out with those guys… (adapted from WTTW Arts Online) 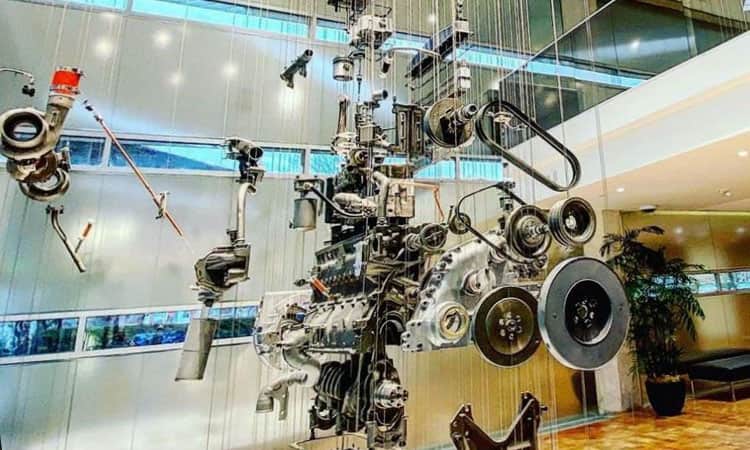 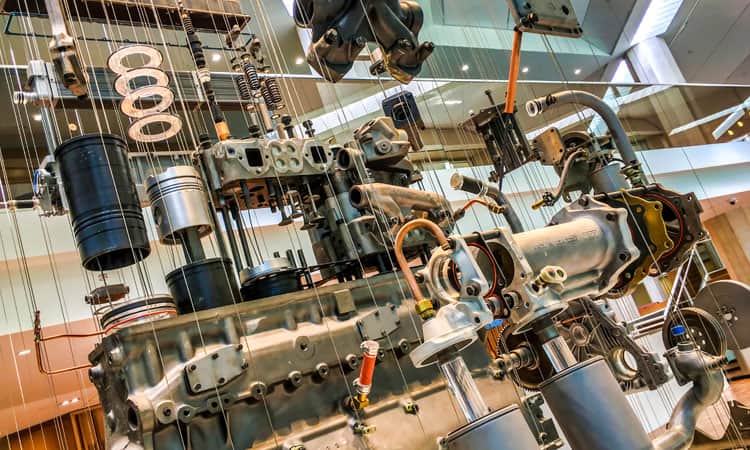 Exploded Engine by Rudolph de Harak is both instructional and fascinating. Nearly every nut and bolt is deconstructed to its smallest detail and hangs in midair, suspended by floor-to-ceiling wires. The diesel engine is the centerpiece of the museum at the Cummins Corporate Headquarters. The New York Times obituary for de Harak says, “For the centerpiece of the Cummins Engine Museum in Columbus, Mr. de Harak conceived a display he called an ‘exploding’ diesel engine; it hangs by wires in midair, revealing its every part, including all the tiny nuts and bolts. It was one of his many approaches to extracting useful, fascinating information from the most minute details.” 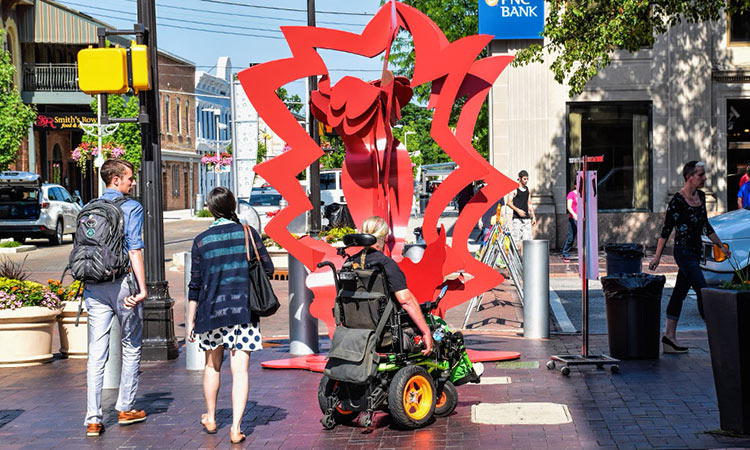 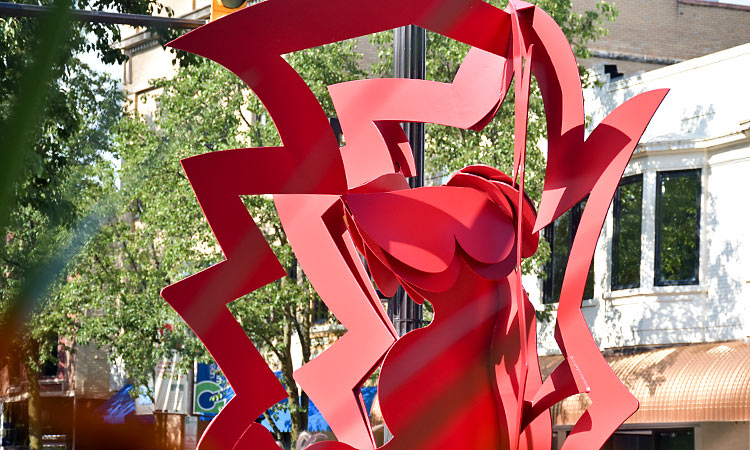 Corner of Washington and Fourth Street
Map it

Created by artist Ruth Aizuss Migdal in 2010 in Chicago. The fabricated stainless steel sculpture was part of the Columbus Sculpture Biennial for two years, until a fundraising campaign by community members raised money to make it a part of the Columbus permanent art collection in 2016. 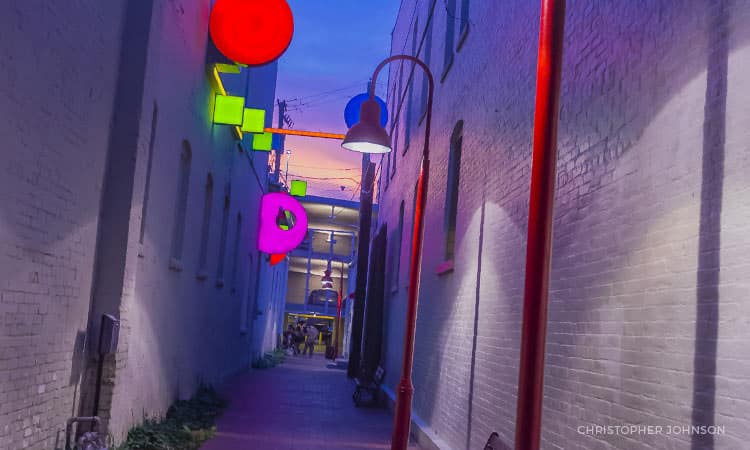 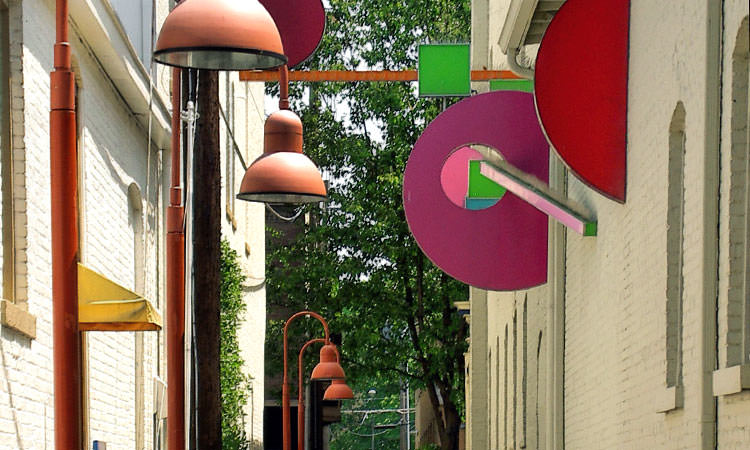 Friendship Way (Columbus Walkway Project) is an extension of Streetscape, featuring a similar rhythmic brick paying pattern, and featuring a neon sculpture by Cork Marcheschi. The project design and landscaping was by William A. Johnson. Citizens of Miyoshi, Japan, the sister city to Columbus, purchased bricks with their names engraved on the path.

“I never knew I would end up in the world of public art. It was an accident and a good one. I really don’t think of my public work as art. It is a cross between creative problem solving, designing, and engineering. If you are lucky enough to get a project that actually wants art – BONUS! My studio fabricates all of the public pieces we do. It must be my blue-collar upbringing that hasn’t allowed me to hand off the fabrication to others and it gives me something to do.” – from Cork Marcheschi, Portrait of Artist as Outlaw, p. 82 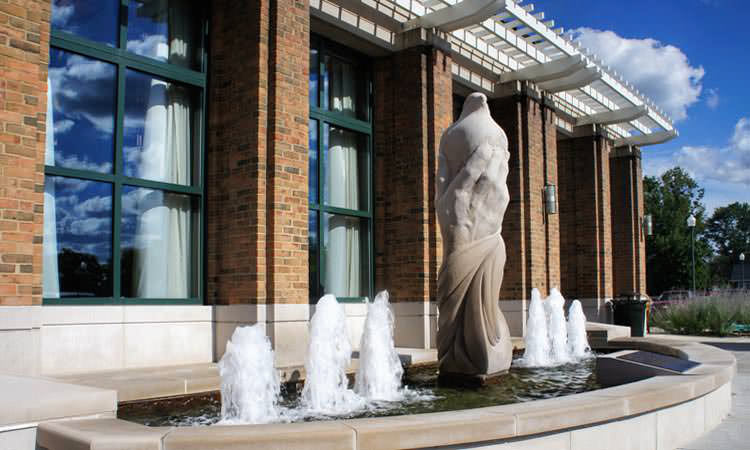 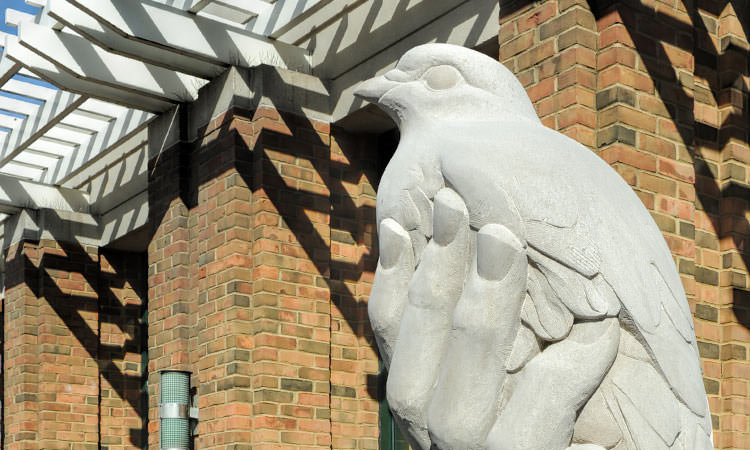 Indiana artist Todd Frahm’s limestone sculpture represents a dove emerging from a flood. The piece was dedicated to mark the aftermath of a 2008 flood that did devastating damage. It was dedicated to the staff, physicians, and volunteers who endured the flood and worked to restore the hospital to working order. 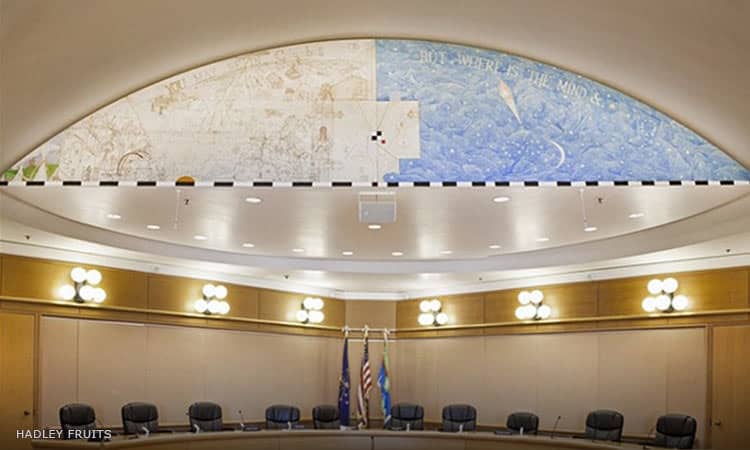 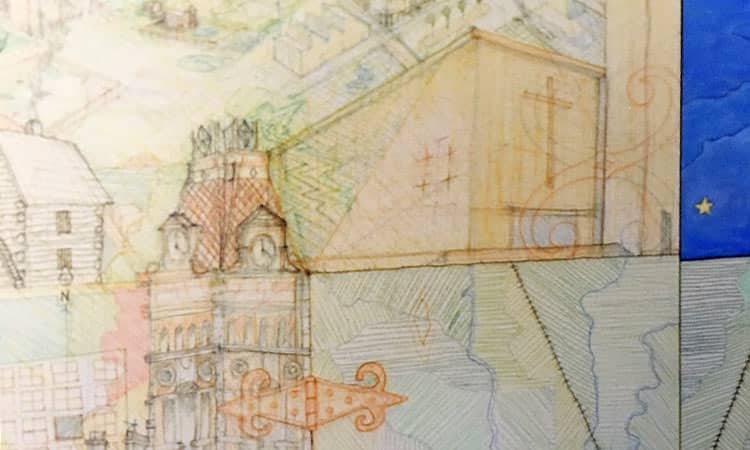 Painted on the tympanum of the City Council Chambers, Wiliam T. Wiley’s mural depicts the local history of Columbus. Wiley, a noted contemporary American artist, was born in Bedford, Indiana. 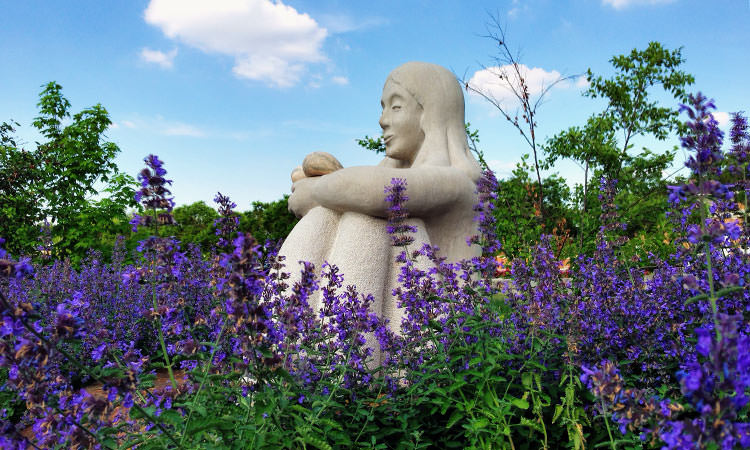 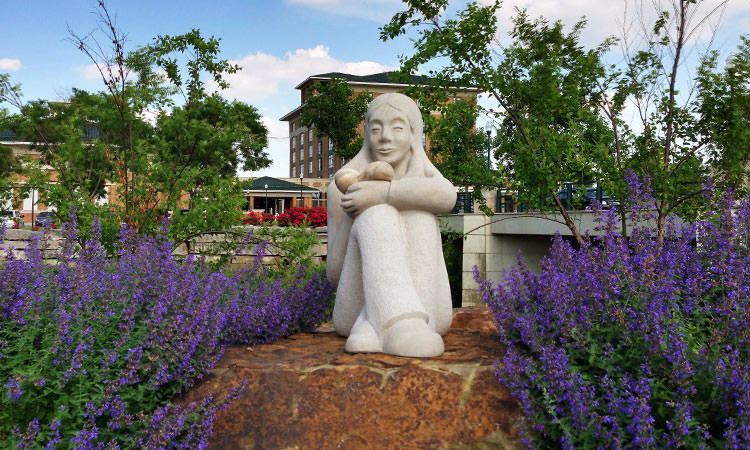 On the People Trail, across from the hospital
Map it

This sculpture by Columbus artist Linda Peterson is in memory of Jolie Crider, who passed away in 1998. The girl is sculpted from limestone and she holds a pink marble heart in her hands. 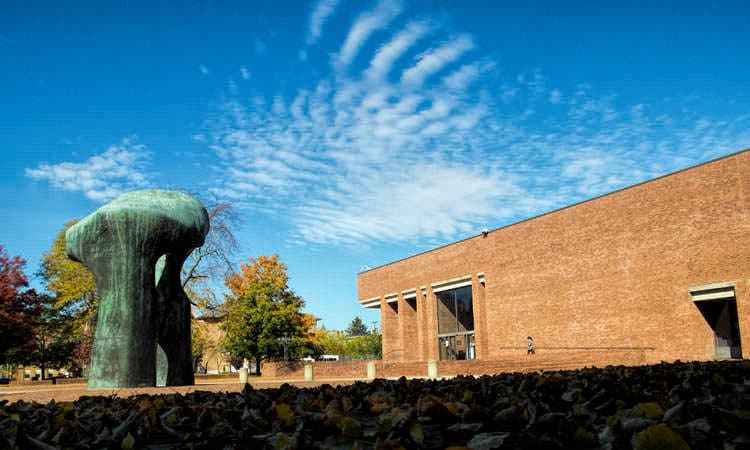 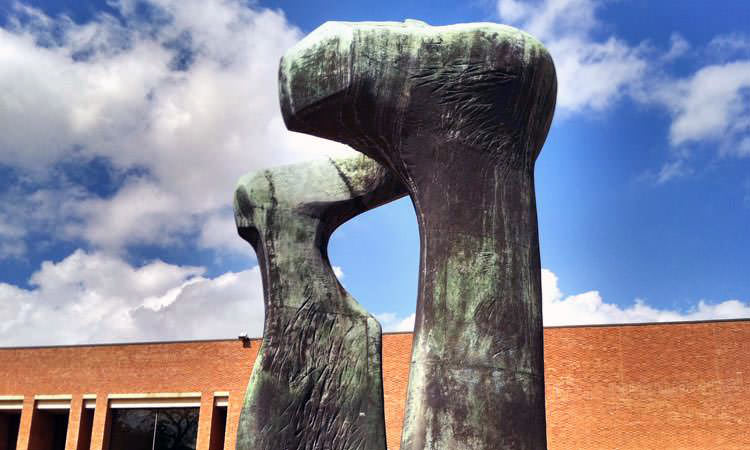 Henry Moore may be the most influential public sculptor of the twentieth century, and his Large Arch is the largest of its kind in the nation. I.M Pei, the architect for the library, suggested that the plaza needed a sculpture to enliven and “hold the space,” and he recommended Moore.

Its abstract and organic form provide a contrast to the geometric shapes of the buildings surrounding it. Pei wanted the piece be interactive and requested that it be big enough for a couple to stroll through. Moore agreed on the condition that the opening would not be large enough for a car to drive through. Henry Moore said, “As a young sculptor, I saw Stonehenge and ever since I’ve wanted to do work that could be walked through and around.”

The sculpture is 20 feet tall, 12 feet wide and weighs five and one-half tons. It was designed at Moore’s home and studio in England, and sandcast in bronze in fifty sections at the Herman Noack foundry in West Germany. The pieces, one-fourth to one-half inch thick, were welded with invisible seams. The green patina is a natural aged look for bronze, and was created through a special process, directed personally by the sculptor at the foundry. Henry Moore was 73 when he created Large Arch.

The sculpture was commissioned by J. Irwin and Xenia S. Miller as a gift to the City of Columbus in 1971.