Excerpts about Girard’s influence in Columbus

Selections from publications that discuss Girard’s work in Columbus.

“Being in the Miller House is the closest thing to being in our grandparents’ own home that I’ve felt since they passed away. The mixture of folk art, fine art, global textiles, color both bold and subtle is deeply familiar. Our grandfather was not a man of ego, and you can feel his humility and humor through the house despite its grandeur and formality—there is an elegant comfort to it all.”

“The Irwin-Sweeney-Miller family was pursuing its own vision. After retaining architect Alexander Girard to renovate the drab Victorian storefronts on Columbus’s main drag—Girard used “daring” paint schemes to liven up the building facades—the family engaged Los Angeles-based architect Cesar Pelli and a Chicago shopping-mall developer to draw up plans for a new “superblock” in the heart of the downtown. As it turned out, this effort would take several years, extending into the early 1970s. But through these and related initiatives, mostly concentrated in the downtown area, the Cummins Engine Foundation, the company, and its founding family played a central role in defending Columbus against the dis-investment and decay that increasingly were afflicting American cities in the 1960s. Indeed, the small southern Indiana city emerged as a showcase for contemporary American architecture.” 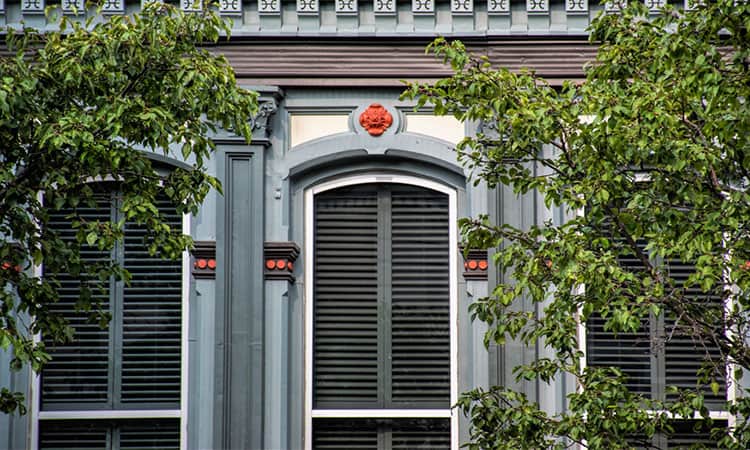 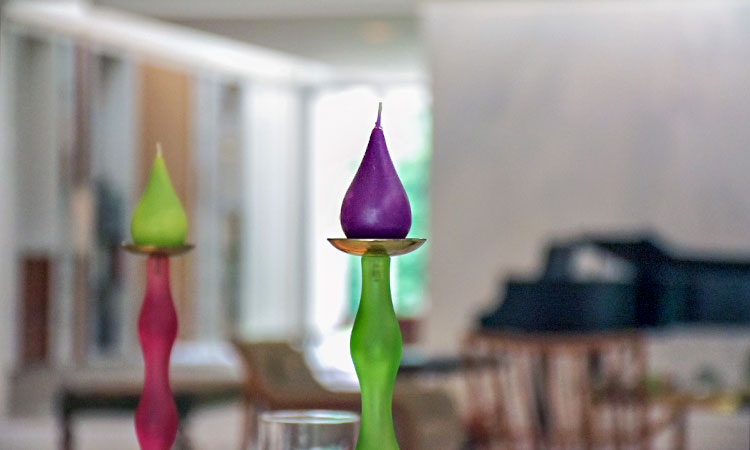 “For many of the 21 years Alexander Girard worked for furnishings giant Herman Miller, the absurdly prolific designer spent his days alone in his studio, crafting what were to become icons of mid-century textile designs…Until 1973 Girard was the company’s head textile guru, producing patterns to befit the furniture designs of his buddies like Charles and Ray Eames and Eero Saarinen, though his prowess extended far beyond silk screens and Jujube-like geometries. He had three architecture degrees, spoke eight languages, collected folk art, and crafted holistic and huge-scale design campaigns.”

“On September 21, 1967, First Lady Lady Bird Johnson visited Columbus, Indiana. The architects of the town’s famous modern architecture program lined up to greet her outside Gunnar Birkerts’s Lincoln Elementary School (1967), leaning on the concrete bollards designed to channel the schoolchildren up the wide concrete stairs and into the body of the school. John Dinkeloo, Dan Kiley, Robert Venturi, I.M. Pei, Harry Weese, John Carl Warnecke, Birkerts. But over on the far right, clasping hands with Pei and almost out of frame, is Alexander Girard. That’s where he liked to be.”

“Girard pulled a lot of weight in turning Columbus into a modern architecture mecca, designing homes, offices, and a Main Street for its chief architectural patron J. Irwin Miller. Girard also worked alongside George Nelson and Charles Eames at Herman Miller (no relation to the Indiana Millers).”

“Columbus is one of few places outside Santa Fe to see the real thing. Columbus, as you may know, is no ordinary American Midwestern town.”

“The Downtown Development Agency, an organization of fellow business leaders, also wanted to get in on Girard’s act. They met with him on May 5, 1961, and one subsequently wrote: Mr. Girard pointed out that in our effort to be “different” we, as merchants, are growing toward a rather horrible degree of “uniformity”. This is true even though the signs are of different shape, sizes, color, light intensity, etc. We have pretty much arrived at a “jungle” wherein one sees everything at the same time he is seeing a blur of nothing. His solution: a design scheme for the whole town, block by commercial block. Neither postmodernist like Venturi and Scott Brown, who embraced signs, nor modernist like Victor Gruen, whose malls had their own design guidelines, Girard instead worked with the fabric at hand … Sure, the TWA Terminal is great, but what about making over an airline? Yes, you built a museum in Washington, but how about making over a town—without tearing anything down? Girard practiced distributed design, touching many people’s lives in unexpected ways, and never letting his ego come first.”

Girard and The Miller House

Girard can lay claim to inventing the conversation pit — as evidenced by his 1955 interior design for J. Irwin Miller’s Columbus, Indiana, home designed by Eero Saarinen.

Saarinen turned over the interior design details to Alexander Girard, who enlivened the rigorous architecture with brightly colored rugs, pillows, and wall hangings. “He made the house a home,” says Roche. “His sense of color was remarkable.” Behind the cylindrical fireplace in the living room, Girard designed storage cabinets for the Millers’ collection of antiques and art from all over the world. For seating, he sunk a fifteen-foot-square conversation pit into the floor “The kids had overnight pajama parties in there,” recalls Irwin Miller.

Both Alexander (Sandro) and Susan Girard became good personal friends with both Millers. According to Will Miller, both of his parents “loved Sandro and Susan. They had both a professional connection and also a friendship.” But it’s apparent in their letters that Susan and Xenia were especially close, and Susan often served as the communication channel between her husband and Xenia.

Alexander Girard’s work imbued modern interiors with strong colors and playful patterns that brought warmth and comfort to rooms that might otherwise have seemed severe and uninviting. For the Miller House, Girard designed a wide range of interior architectural details, including a 50-foot long main storage wall and the conversation pit, as well as a seasonally changing program of textiles that enlivened the interiors. Working with Xenia Miller, he selected ornaments and antiques to personalize the house. He also designed several rugs for the house, including one composed of emblems that represent family history and associations. There are ‘Y’s for Yale (Mr. Miller’s alma-mater), representations for each child, and additional symbols of meaning to the family. Some of the chair cushions designed by Girard also feature the initials of family members. His passion for folk art is also visible in the objects chosen for the interior of the house.

Through the late nineties…Mr. Miller would have his mail sent home and work out of the former gardener’s shed that Alexander Girard had redesigned.

Elizabeth G. Miller recalls…”Sandro would take (my mother) up and down Second Avenue in New York and say, ‘Get out of the car and go into that antique store. Come out in fifteen minutes and tell me the three items that are the best in there.’ It scared her if she didn’t get the three best. It was a fabulous education. She did have a good eye in the end, and her eye was trained by Sandro…”

FROM WHY MAGAZINE
“Earlier this summer, WHY visited Columbus with Girard’s son Marshall Girard, his grandchildren Kori Girard and Aleishall Girard Maxon, and photographer Nicholas Calcott. We went to make sense of Girard’s legacy and to see what’s next for Columbus’s current crop of designers, archivists, and historians.Here’s what we saw and what we learned” 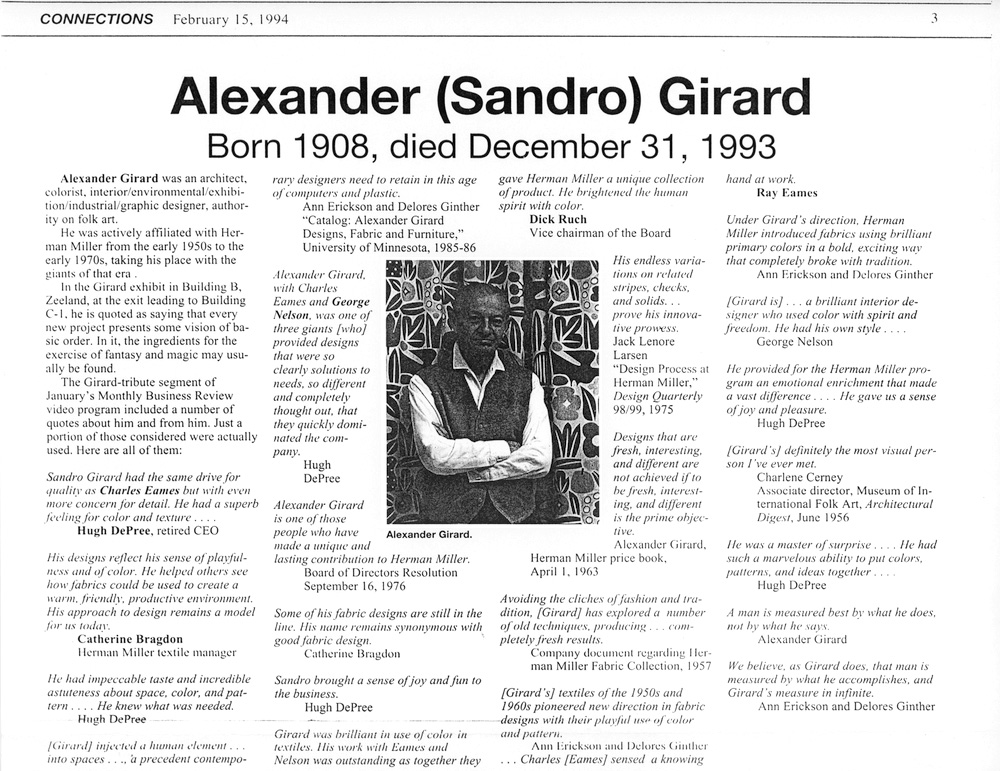 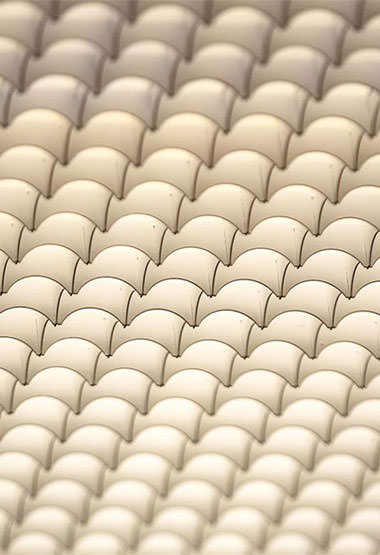 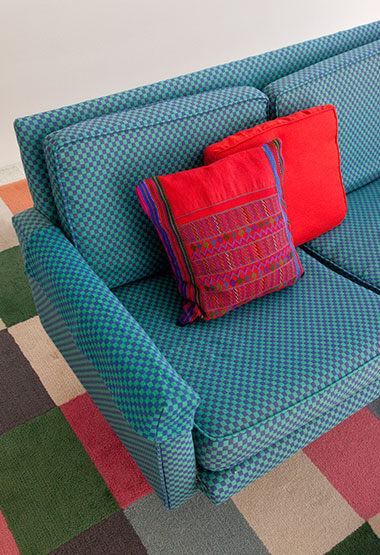