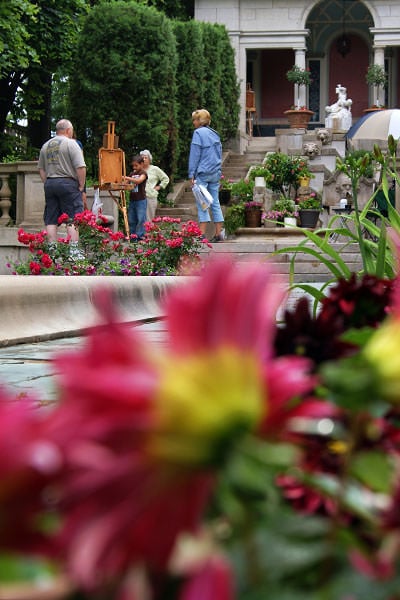 In an ornate, circa-1910 mansion with period features, this posh bed-and-breakfast is minutes from downtown Columbus and eight miles from Edinburgh Premium Outlets shopping center.

Built in 1864 by Joseph I. Irwin, Columbus banker and businessman, this Italianate design was remodeled in 1880 to accommodate four generations of the Irwin family. The current mansion was the achievement of Henry A. Phillips, a Massachusetts architect, who was hired by William G. Irwin in 1910.

The highlight of this two-acre property is the garden, a beautiful maze based on the Casa degli Innamorati in Pompeii. Several fountains and a long pool are the focal point of a lowered sunken garden. A statue under the center arch of the garden house references the Villa of Hadrian at Tivoli, Italy. Pompeian murals accent the garden house. A tall brick wall is rounded in imitation of 16th-century gardens in Mantua, Italy. Wisteria vines on the terrace pergolas were planted in 1911 and continue to bloom each spring. Only the English sundial and a Japanese bronze elephant sculpture, a replica of one at the 1904 St. Louis World’s Fair pavilion, do not follow the Italian motif.

It was on this property that Clessie first began “tinkering” in the garage, and where he developed the ideas and technology for a high-speed diesel engine. With the backing of William Glanton Irwin, his ideas became the cornerstone product of Cummins, Inc., now a Fortune 500 company. (The original garage has since been removed, and greenhouses now stand in its place.) W.G. Irwin’s great-nephew J. Irwin Miller, who was born and raised in this house, and his wife Xenia, had the vision that ultimately led to the development of the trove of modern architecture in Columbus, Indiana.

The gardens are open to the public on Tuesday and Sunday afternoons June through October, from 2 – 6 pm. See the calendar for details and see more photos.

The Gardens are located next to the public library and the Visitors Center.

Amazing! Staying at The Inn is like staying at the home of a good friend...

…in which the entire house is open for you to explore. The inn is beautiful and still contains much of the original furniture and fixtures. You truly feel as though you are taking a step back in time as you walk through and explore the library, the music room and dining room and all the nooks and crannies throughout the house. The gardens are amazing as well. It’s so peaceful to walk along the path through the gardens or to sit on the terrace with a cold drink. – Michele from Cincinnati

Wonderful! It is a privilege to be able to stay in a large mansion with amazing gardens and very intact plumbing and EVERYTHING dating back to the 1920s renovation of the house. It is a critical ingredient in the history of Columbus and founding of Cummins Engine (where the first Cummins Engine was built on the property). For a room, I would gun for the WG Irwin room. It feels like you are in your own world with wonderful views of the gardens and neighboring trees. The service is impeccable and they are totally on it when it comes to guest services. The breakfast is delicious, served either in the beautiful dining room or on the lovely terrace outside. I could easily spend a month there (and hope to someday!). Columbus is amazing and the Inn at Irwin Gardens is an absolute must if you stay here.

Solitude for the Soul – A restored turn-of-the-century mansion in Columbus Indiana. Brittany, the innkeeper, was a gracious and welcoming host who cooks a mean baked egg at this bed and breakfast. The room was large, clean, and comfortable. The gardens on the property are historical, spacious, and inviting. A great place to think. Downtown restaurants and shops were walkable.

Beautiful property, very comfortable beds, and an incredible host – Stayed in the WG Irwin Suite on the top floor for 2 nights. Just awesome. So comfortable and grand. Pretty cool knowing I stayed in the room where Columbus the movie was shot. The room was spotlessly clean, as is the entire property. The property is full of history, and original period furniture. It feels like you’re stepping back in time with every room. We read books from the library and found Irwin family hotel receipts from a London trip in the mid 20s tucked into guidebooks from the time. Amazing. In terms of location, it can’t be beat.

Book a tour of Inn at Irwin Gardens