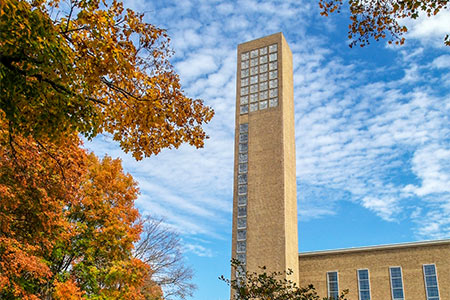 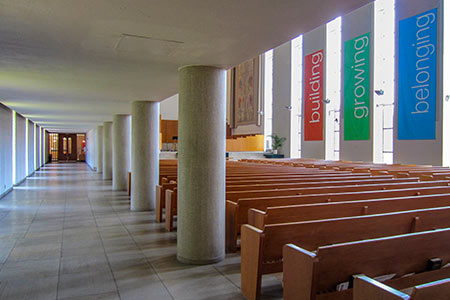 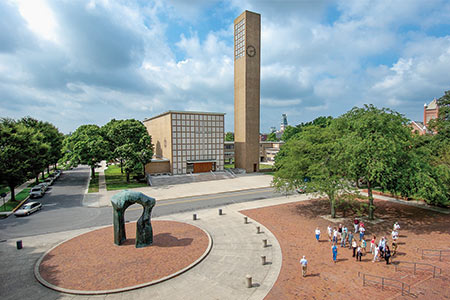 First Christian Church was not only the first contemporary building in Columbus, but also one of the first churches of contemporary architecture in all of the United States. The geometric simplicity of the building’s design is exemplified in the rectangular box that houses the sanctuary and the 166-foot-high campanile (bell tower), which became the iconic symbol of the city’s modern architecture.

The church occupies an entire city block, with a two-story classroom wing supported on columns and piers, and a sunken garden originally containing a reflecting pool. For father-son architectural duo Eliel and Eero Saarinen, symmetry was not front-of-mind when they designed First Christian Church: “We have not been concerned with a symmetrical solution … the function of the chancel [the part of the church reserved for the clergy and choir, typically separated from the nave by steps or a screen], is asymmetrical in its nature.”

The building’s exterior is made of a buff brick with limestone accents. The main entry facade is a 10×12 grid with a slightly offset entry and a stone cross. Stone columns, benches, and exterior baptistry fonts feature relief detailing typical of students from Michigan’s Cranbrook Academy of Art.

A tapestry titled “The Sermon on the Mount” was designed by Eliel and his wife, Loja. In 2002, a two-story classroom wing was added to the south side, distinguished from the original building with a slightly contrasting brick.

“There is no traditional architectural style that could be successfully employed to express our purpose. For generations the basic pattern of church structure has remained practically unchanged. At best, the recent designs have been recreations of traditional styles. None of these could fully express the grandeur and yet simplicity of Christian faith unencumbered by human creeds and human symbolism. The only alternative was to find an architect whose creative genius would make possible the realization of such an expressive building. This was accomplished when Eliel Saarinen consented to accept this commission.” – Reverend T.K. Smith, 1943 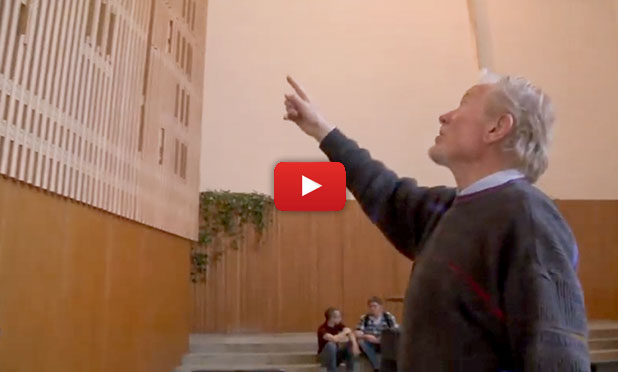