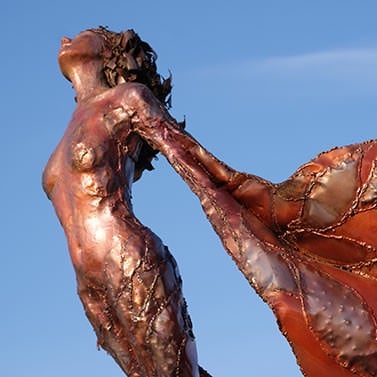 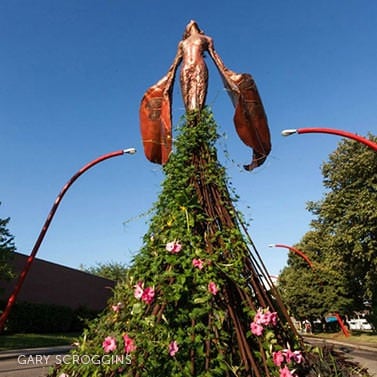 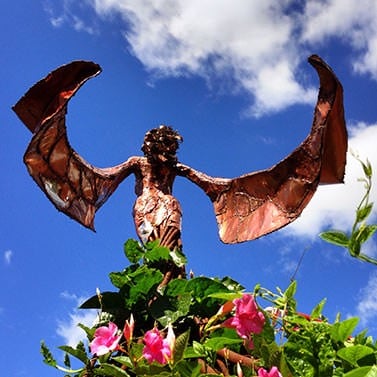 Dessa Kirk, 2006
Dessa Kirk worked at a local warehouse while completing Eos.
Originally part of the 2006 Sculpture Invitational, the piece was so popular with the community that a fund drive raised the money to ensure she had a permanent home in Columbus.
In Greek mythology the winged Eos was the goddess of the dawn, and rose from her home at the edge of Oceanus, the Ocean, dispersed the mists of the night and opened the gates of heaven every day so her brother, Helios, the sun, could ride his chariot across the sky. Generally depicted as a supernaturally beautiful woman, her tears were considered to be the morning dew.
“Columbus, Indiana has all these amazing buildings by amazing architects that were commissioned by Cummins. The one great sculpture, the Henry Moore, I want to be in the same city as Henry Moore, why not, it’s a beautiful thing. Beautiful city in a beautiful setting. You want to see great architecture, go there. There’s New York City, but Columbus is where you want to go. And there’s great sculpture, my all-time favorite sculptor, Tinguely. I want to be a part of that, I want to be there hanging out with those guys.” (Dessa Kirk, from WTTW Arts Online)
Return to the self-guided tour listings
Get directions on Google Maps (opens a new window).