This smartphone content works with the free, self-guided tour maps available at The Visitors Center. 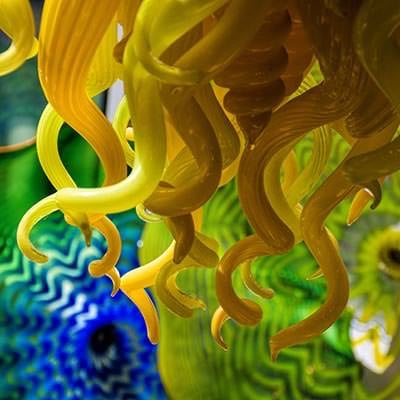 Head to the stairwell in the Visitors Center and look up to see Dale Chihuly’s 900-piece Chandelier and Persians. This is a rare Chihuly chandelier that is lit from inside with neon tubing. Installed alongside Chihuly’s Persians, Yellow Neon Chandelier was a gift from J. Irwin and Xenia Miller in 1995 and installed shortly before Chihuly’s first major exhibition, Chihuly over Venice.

Also note, the addition to the Visitors Center, on the north side, was designed by architect Kevin Roche. 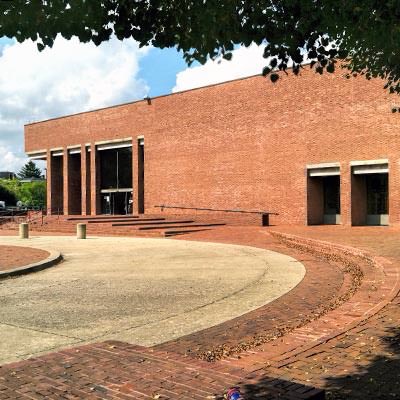 An early project in his career, I.M. Pei wanted the library to present itself as dignified and easily accessible to persons of all ages. Pei also suggested closing off Lafayette Street to create the public plaza, in the manner of the plazas of European cities.

Go inside the library to see the waffled concrete ceiling and head up to the second floor to see the plantings with skylights and the overlook of the first floor.

Pei is also known for the Louvre Pyramid in Paris and the Rock and Roll Hall of Fame in Cleveland. He also created the IU Art Museum in nearby Bloomington. Pei received the Pritzker Prize in 1983, the highest honor an architect can receive.

Audio from a tour by Henry Kuehn 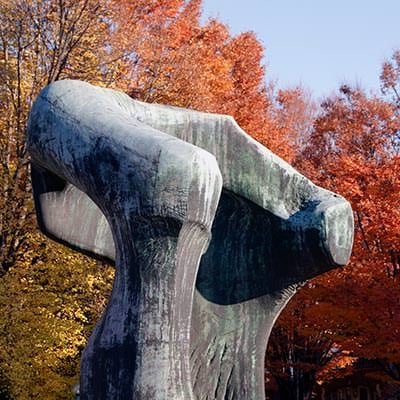 Henry Moore was asked to design a sculpture of the library plaza on the suggestion of I.M. Pei, architect of the library. Pei thought that a work placed in the palza should serve as focal point as well as a counter-balance to the two modernist structures that surround it. It is the largest Henry Moore sculpture in America.

Audio from a tour by Donna Sasse 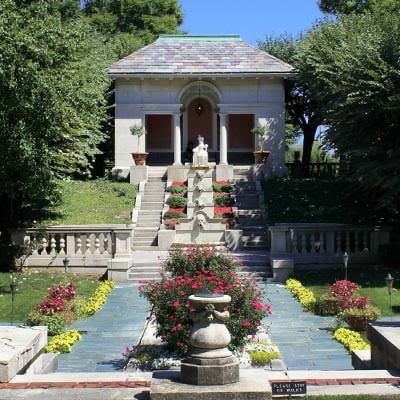 Built in 1864 by Joseph I. Irwin, Columbus banker and businessman, this Italianate home was renovated and expanded in 1910 to accommodate four generations of the Irwin family and several new chimneys, now a prominent feature of the house, were added.

This property played a dramatic role in the history of Columbus. Clessie Cummins served as chauffeur to the Irwin family – it was on this property that he began tinkering in the garage and developed an idea for a high-speed diesel engine. With the backing of W.G. Irwin, his ideas became the cornerstone of Cummins, Inc., now a Fortune 200 company. (The greenhouses on the north side replaced the family’s garage.)

​W.G. Irwin’s great-nephew J. Irwin Miller, who was born and raised in this house, had the vision, along with his wife Xenia, that ultimately led to the collection of modern architecture in Columbus, Indiana. 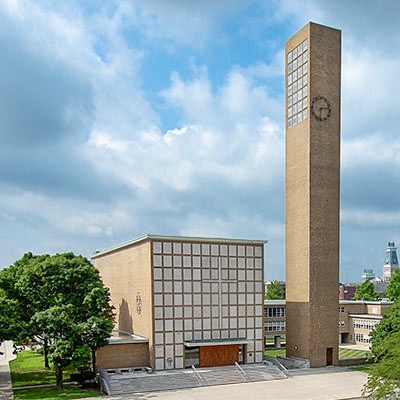 First Christian Church was one of the first modernist religious buildings in America and the work of architect Eliel Saarinen, father of Eero. The building was was featured in Time magazine at the time of its construction and had an impact on church design in the United States in the post-War era.

The integration of arts and crafts for both the interior and exterior reflect the concept of total design that Saarinen had developed in his Finnish period and refined during his leadership at Cranbrook Academy in Bloomfield Hills, Michigan.

​The building named a National Historic Landmark in 2001. 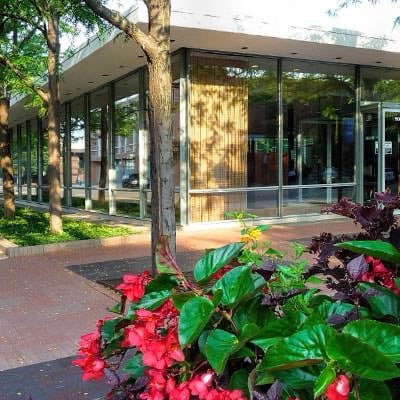 (Originally Irwin Union Bank and Trust) The work of legendary architect Eero Saarinen, Irwin Union Bank and Trust was possibly the first financial institution in the United States with glass walls and an open plan, dramatically differing from traditional bank concepts, and the design influenced the future of bank design. It remains a stellar example of classic Modernist form as a minimalist but entirely functional glass pavilion that pays homage to Mies Van Der Rohe’s Barcelona Pavilion.

The Dan Kiley landscape of a gridded bosque of trees is an extension of the building’s formalism and a precursor to the structuralism he further developed throughout his illustrious career. 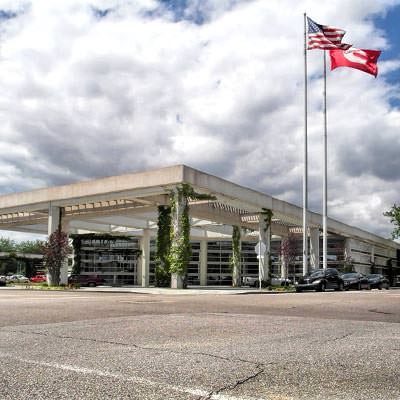 The international headquarters for the Fortune 200 Cummins Inc., designed by Kevin Roche (of Kevin Roche John Dinkeloo and Associates), a Pritzker Prize winner.

The zigzag plan configuration interacts with a park-like setting on the east side of the building, defined by a portico surrounding the four-story historic Cerealine building, which serves as the employee cafeteria. ​The building is primarily cast-in-place octagonal concrete columns with infilled precast concrete spandrels and narrow windows to provide noise and sun control.