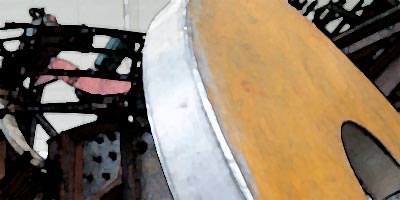 This smartphone content works with the free self-guided tour maps available at The Visitors Center, Viewpoint Books, and Hotel Indigo. 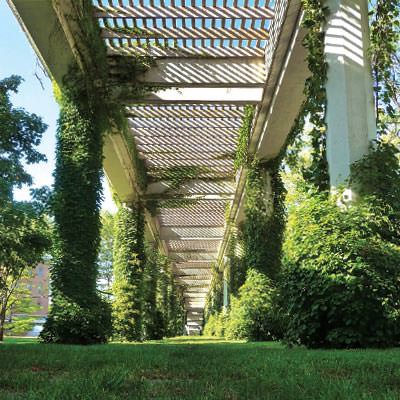 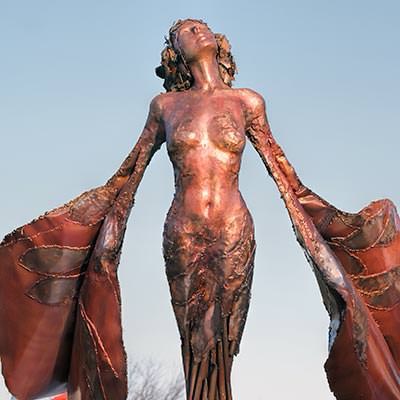 Eos was created by artist Dessa Kirk in 2006 for a two-year sculpture invitational, but when it came time for the piece to be moved to a new location, citizens quickly raised the money to purchase it and ensure Eos would become a permanent resident of Columbus.

In Greek mythology, the winged Eos was the goddess of the dawn. Generally depicted as a supernaturally beautiful woman, her tears were considered to be the morning dew. Dessa Kirk cast the body of Eos when she worked on the sculpture here in Columbus.

Comments by artist Dessa Kirk: Columbus has all these amazing buildings by amazing architects. The great sculpture, the Henry Moore, I want to be in the same city as Henry Moore, why not, it’s a beautiful thing. Beautiful city in a beautiful setting. You want to see great architecture, go there. There’s New York City, but Columbus is where you want to go. And there’s great sculpture, my all-time favorite sculptor, Tinguely. I want to be a part of that, I want to be there hanging out with those guys… ( from WTTW Arts Online ) 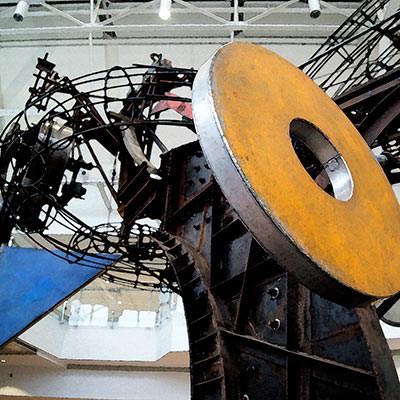 Chaos I is a seven-ton, kinetic sculpture by Swiss artist Jean Tinguely (1925-1991). The thirty-foot high piece is the largest work by Tinguely in the United States.

It seems fitting that the centerpiece of Columbus, a city known for both its great architectural designs and its world-class manufacturing operations, would be a sculpture that successfully marries art and engineering. Tinguely, a colorful character sporting a bushy moustache, took up residence in Columbus’s former city powerhouse on the river (three blocks east and south, now Upland Brewing) during 1973 and1974. Locals have fond memories of the artist-in-residence, who became a regular at the local “watering holes” during that time.

Chaos I cycles through a series of motions to simulate a day in a life, beginning slowly at first, adding movements, and then winding down again. At the peak of its chaotic movements, steel balls roll and crash through a caged track.

The architect of the original Commons, Cesar Pelli, first suggested that a sculpture by Tinguely would be the perfect centerpiece to this downtown facility. Pelli said, “We would like a great magnet, a focal point such as the old town clock…a place for people to meet and greet one another.”

The work was commissioned by J. Irwin and Xenia Miller and Mrs. Robert Tangeman in late 1971.

TIP : While inside The Commons, check out Luckey Climber, by Thomas Luckey, a climbing installation for kids.

See an interview with Roland Wetzel, Director of Museum Tinguely in Basel, Switzerland (4:00) 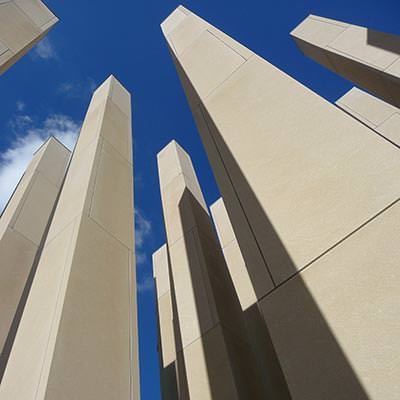 The Veterans Memorial is composed of twenty five limestone pillars, each forty-feet high, in a five-by-five grid. Engraved on the columns are the names of those who gave their lives, along with excerpts from selected correspondence. Though large, the piece offers a meditative and intimate experience from the letters to and from the soldiers.

The memorial was designed by Thompson and Rose Architects and received the Boston Society of Architects Unbuilt Architecture Design Award in 1996. 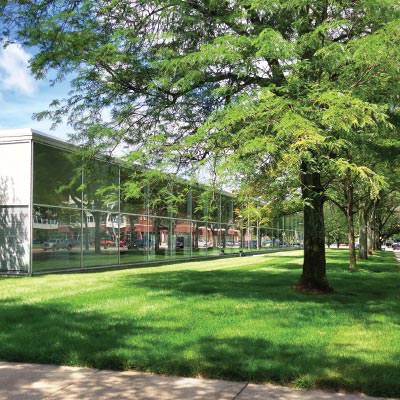 Myron Goldsmith of Skidmore, Owings & Merrill designed the newspaper in 1971 of glass and steel and provided onlookers with a window into the business of newspaper production. Originally, the paper’s printing presses could be viewed from the street.

The Republic was the seventh Columbus structure to be named an historic landmark, The U.S. Interior said, “The Republic is an exceptional work of modern architecture and one of the best examples of the work of Myron Goldsmith…”
​
From the New York Times obituary for Myron Goldsmith: A student both of Mies and of Nervi, two of the century’s most important architects, Mr. Goldsmith brought their influence to bear on more than 40 projects he designed around the nation… Like Mies, Mr. Goldsmith sought to express the structural essence of his buildings in their exteriors, unmasked by ornament. Like Nervi, he designed with the sweeping arcs and long spans made possible by new technologies. The results were almost sculptural: cool, spare, gleaming, and hard-edged. 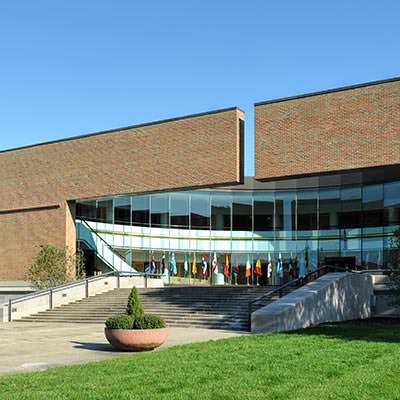 Columbus City Hall was designed by Edward Charles Bassett of Skidmore, Owings, & Merrill. The triangular building is sited to create a strong visual relationship between the old and new architecture downtown and to signify the end of the business district.

Bassett was in the last graduating class of Eliel Saarinen at Cranbrook Academy of Art.

From an interview with Edward Charles Bassett posted by The Art Institute of Chicago : One would have to go to great pains to be unaware of how many talents and energies share in the creation of a fine building, or of the discrepancy between the truth and the myth kept alive by an obvious cynicism that a building is born full-blown out of a single person’s head. To perpetuate that myth, when it takes so many people, so much talent, so much technical expertise, so much dedication and commitment to a professional work ethic of a profession they love, has always bothered me…

About SOM: ​Surprisingly Columbus has two buildings by the firm of Skidmore, Owings and Merrill (SOM) right across the street from each other: City Hall and The Republic Newspaper offices. SOM has created many of the major projects of the 20th century. SOM was named AIA Firm of the Year in both 1961 and again in 1996 – no other firm has been awarded the prize more than once. 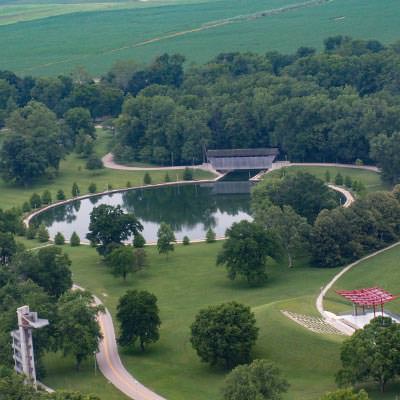 The park is 85 acres : we recommend you get your car and drive the loop before choosing a spot to park and explore.

Designed by landscape architect Michael Van Valkenburgh and featuring structures designed by Stanley Saitowitzit, the park has an 84-foot observation tower, a covered bridge, easy access to the Columbus People Trails, fishing, picnic shelters, playground equipment, basketball courts, and an amphitheater that hosts concerts and performances .Landscape Management magazine recognized this 85-acre riverfront park as one of the top 100 parks in the nation for its design, reputation, and accessibility.

The former Brownsville Covered Bridge is an 85-foot single span long truss structure (the only long-truss bridge in Indiana) that was originally built in 1840 near Brownsville, Indiana.

The park restrooms by Saitowitz have playful “M” and a “W” rooflines, and are built of stainless steel that is raised above ground level, allowing flood water to flow through them.

Saitowitz’s eighty-four-foot tall observation tower is located at the edge of the river. It’s 133 steps to the top, but a good view once you’re up there!

The Columbus People Trail runs right through the west end of the park. Head north on the trail and you’ll walk through wooded lanes by the river and end up at Noblitt Park, not far away. Head south and you’ll wind under Third Street Bridge and end up at the former power plant that has been renovated into an Upland Brewing restaurant.

The sculpture named Skopos, by former local sculptor Rick Bauer, is located on the People Trail, look for it just south of lookout tower.