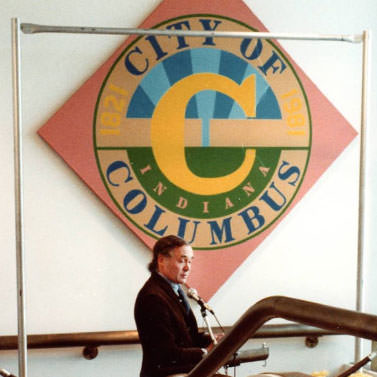 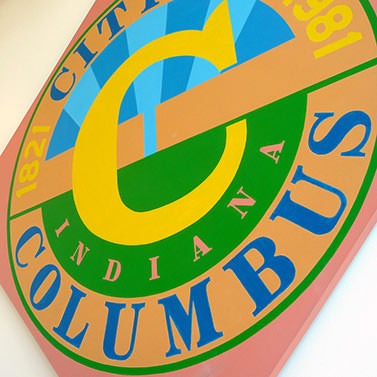 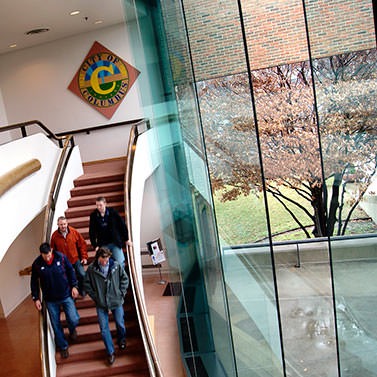 The  C painting by Robert Indiana (pictured at unveiling in Columbus, above, in Nov. of 1981) is representative of his pop art pieces and uses the imagery he called “sculptural poems.” The bold, simple representation combines the trendy with the philosophical and centers around a basic focal point, the C in the center.

The piece includes the date the city was founded (1821) and the date Robert Indiana finished the work (1981).

The letter “C” figures prominently to Indiana, who preferred to characterize his work as “commemorative, celebratory, and colorful.”

Robert Indiana had a Columbus exhibition (loaned from the IMA) at the Columbus Visitors Center in 1975. Columbus is also the last Indiana town in which he officially lived, and it is the place where his mother passed away in 1949. Learn more HERE.

Get directions on Google map (opens a new window).

The story reprinted below is by Harry McCawley, from The Republic newspaper, Jan. 20, 2014.

Robert Indiana will be coming home next month. On Feb. 16 the famed artist will open an 11-week exhibit of his works (“The Essential Robert Indiana”) at the Indianapolis Museum of Art.

It will be a homecoming for the man who chose the state for his adoptive last name. He had good cause. Before he reached adulthood he had lived in 21 Hoosier cities and towns.

Columbus was his last Indiana home.

When you live at 21 different addresses in the space of 21 years, some connections can be considered tenuous at best. The Columbus tie was established in 1946 when his mother, the former Carmen Waters, who was born in Sandcreek Township in Bartholomew County, moved to a house on McKinley Avenue with her husband, Foster Dickey, Indiana’s stepfather. At the time, Robert Indiana was Robert Clark, his birth name.

While the house on McKinley Avenue was his official address, it’s doubtful that he spent much time in it. When the family moved from Indianapolis to Columbus, he was just completing his senior year at Arsenal Technical High School. After graduation, he enlisted in the U.S. Army and was still on active duty when his mother died in 1949.

But the McKinley Avenue house did make an impression on the artist. He made several references to it and Columbus in remarks during return visits to this city, one in 1975 when his works were exhibited in the Columbus Gallery of the Indianapolis Museum of Art, which at that time was located on the second floor of the Columbus Area Visitors Center.

His most detailed comments about Columbus came about because of a really direct connection to the city. In 1981 he presided over the unveiling of one of his trademark works, a diamond-shaped “C” displayed at the top of the staircase leading to the upper floor of City Hall.

Large letters are at the center of most Indiana works. His fame as an artist had been cemented by the iconic “LOVE” sculpture, which has been the trademark of the Indianapolis Museum of Art since 1970.

His Columbus “C” was derived from several memories, many of them personal and relating to his last Indiana home. He told the audience at the unveiling on that day in 1981 that one of the “C” links was obviously Columbus, but then he added several other connections. One was to his given name of Clark. Another to his mother’s name, Carmen. He also suggested the art was influenced by the driving force in the city’s economy, Cummins Engine Co. He evoked the love he felt for his mother by alluding to another “C,” the Crump Theatre, where he took his mother for a movie shortly before her death.

He even injected a bit of humor into his “C” connections, suggesting that the letter could symbolize the courage the city leaders exhibited in selecting him to do the work.

Columbus’ “C” has obviously not achieved the fame of the Indianapolis Museum of Art’s sculpture, but that might have to do with the failure to come to a licensing agreement. Originally city officials envisioned the letter as an official city seal, but that would have required separate licensing fees each time the image was used.

Sadly, the City Hall “C” and memories are the only surviving links that tie the city to the artist.

After the family moved from Indianapolis to Columbus in 1946, Dickey took a job at a bakery owned by Sap Essex of Sap’s Donuts fame.

The family’s living conditions were not ideal. The home on McKinley Avenue was unheated and didn’t have running water. Nevertheless, Foster and Carmen opened a bakery of their own in the house.

The McKinley Avenue house was demolished in the 1960s when Cummins began construction of its Tech Center. The value of the house would have been modest, but one of Indiana’s connections to the city that is linked to the house would be worth millions today.

It was in that house that he painted his first sign. Unfortunately, the sign was lost several years ago.