A four-foot tall bronze by Jo Saylors of four children playing crack the whip, a children’s game dating to the late 1800s. The piece is meticulous in detail, right down to the wrinkles in the clothes and the off-balanced positions of the children.

Commissioned by Mr. and Mrs. James K. Baker as a gift to honor Arvin employees, the piece was originally placed at the former Arvin Corporate headquarters on Central Avenue. After Arvin left Columbus, the Baker’s exercised their option to have the piece relocated to a spot more accessible to the public.

The piece was gifted to Heritage Fund – The Community Foundation of Bartholomew County and moved to its current location.

Take me to Crack the Whip. 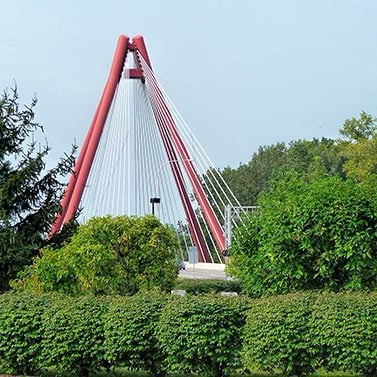 The Robert Stewart bridge into downtown Columbus was completed as the second phase of the front door project. The site was aligned to create an entry vista centered on the historic courthouse tower. The bright red steel supports connect steel tension cables arranged in an arc that is lit in the evening.

Both front-door bridges were designed by Jean M. Muller of J. Muller International of Chicago, who said, “The unique quadripod configuration of this cable-stayed bridge is the first of it kind in North America, and serves both a functional and aesthetic purpose.”

Take me to Stewart Bridge. 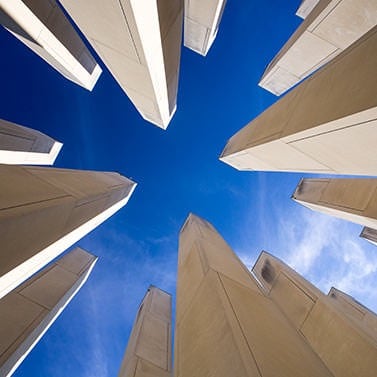 Twenty five limestone pillars, each 40-feet high, in a five-by-five grid, comprise the Bartholomew County Memorial for Veterans. Engraved on the columns are the names of those who gave their lives, along with excerpts from selected correspondence. Though large, the piece offers a meditative and intimate experience due to the letters to and from the soldiers. The memorial was designed by Thompson and Rose Architects and received the Boston Society of Architects Unbuilt Architecture Design Award in 1996.

The Charles Rose website says, “The winner of a national design competition, the Veterans Memorial is a grid of limestone pillars: a monolith of rough and naturally textured stone when viewed from afar and—from its interior meditative spaces—a forest of soaring columns separated by narrow passageways. Veterans’ names, letters and diary entries were etched on the smooth surfaces. At night, lights embedded in the base create a dramatic play of light and shadow and illuminate the memorial’s interior.”

Take me to the Memorial for Veterans. 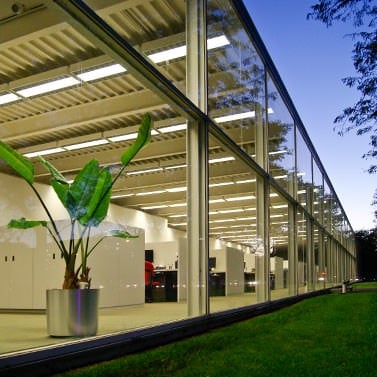 Myron Goldsmith of Skidmore, Owings & Merrill designed the International-style building in 1971 of glass and steel and provided onlookers with a window into the newspaper business. (This building is currently in transition.)

The open concept reflects the daily newspaper’s role as a central link in the information highway.

Goldsmith’s design provided onlookers with a window into the business of communications. The open concept reflects the seven-day newspaper’s role as a central link in the information for the community. Originally, the paper’s printing presses could be viewed from the street, as they printed the daily paper.

The Republic was the seventh Columbus structure to be named an historic landmark, The U.S. Interior said, “The Republic is an exceptional work of modern architecture and one of the best examples of the work of Myron Goldsmith, a general partner in the firm Skidmore, Owings & Merrill, and a highly respected architect, architect”

The AIA (American Institute of Architects) gave the building an Honor award in 1975, one of five recognized in Columbus by the AIA.

Take me to the former Republic offices. 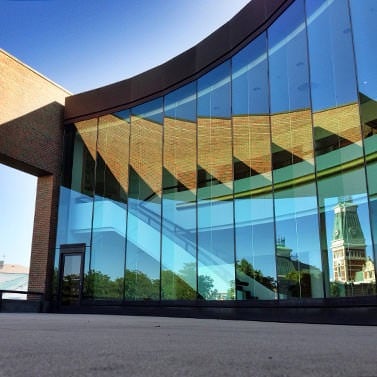 City Hall is sited to create a strong visual relationship between the old and new architecture downtown. The cantilevered arms frame the two-story, semi-circular window wall of glass, shaped to reflect the courthouse to approaching visitors.

The cantilevered arms frame the two-story, semi-circular window wall of glass, shaped to reflect the courthouse to approaching visitors.

It’s unusual that the small community of Columbus has two buildings by Skidmore, Owings and Merrill (SOM) right across the street from each other, City Hall and The Republic Newspaper offices. SOM is one of the largest architecture firms in the world and has created many of the major projects of the 20th century.

SOM was named AIA Firm of the Year in 1961 and again in 1996 — the only firm that has been awarded the prize twice. SOM is known for their high-end commercial buildings, it was SOM that led the way to the modern international-style or “glass box” skyscraper. SOM has designed several of the tallest buildings in the world, including the John Hancock Center and Burj Khalifa, currently the world’s tallest building.

Take me to Columbus City Hall. 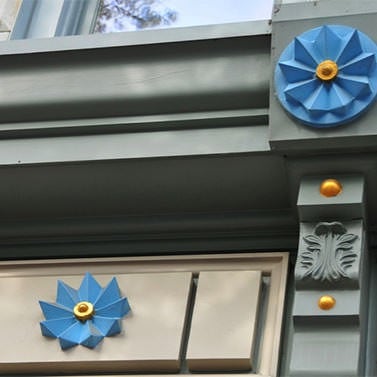 The Irwin-Sweeney-Miller family was pursuing a vision, and retained architect Alexander Girard to renovate the Victorian storefronts on the Columbus main street — Girard used “daring” paint schemes to liven up the building facades — the family then engaged Los Angeles-based architect Cesar Pelli and a Chicago shopping-mall developer to draw up plans for a new “superblock” in the heart of the downtown. As it turned out, this effort would take several years, extending into the early 1970s. But through these and related initiatives, mostly concentrated in the downtown area, the Cummins Engine Foundation, the company, and its founding family played a central role in defending Columbus against the dis-investment and decay that increasingly were afflicting American cities in the 1960s. Indeed, the small southern Indiana city emerged as a showcase for contemporary American architecture.
Look up as you walk along Washington Street to see that there are still colorful Girard touches on the second stories of the buildings.

Return to the mobile map directory.