FIRST, PICK UP A MAP

This guide is a supplement to the $3 art and architecture guide that is available at the Visitors Center at 506 Fifth Street in downtown Columbus. 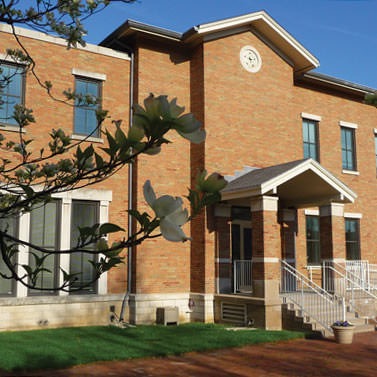 This was originally the home of John Storey, who owned a mill that operated in the former Columbus Inn, the multi-story brick building across the street to the southwest.

The building has been repurposed multiple times – as a lodge, a furniture store, a Boy’s club, newspaper offices, and now a visitors center.

In 1973, J. Irwin Miller’s wife, Xenia, directed the renovation of the home into a visitors center for Columbus.

The back of the building was added in 1995 by Kevin Roche. His seamless addition repeats the original design, a technique known as adaptive reuse. Roche received architecture’s highest prize, the Pritzker Prize, in 1982.

The Dale Chihuly chandelier installation, near the steps to the second floor, was suggested by Roche. 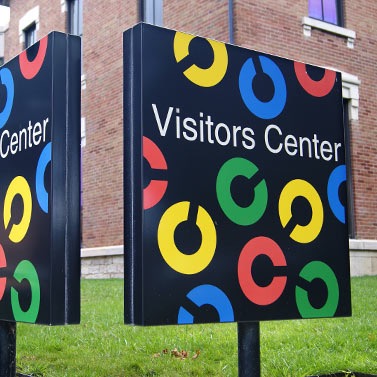 In 1962, Paul Rand, one of America’s premier graphic artists, created the trademarked corporate logo and identity for Cummins Engine Company – he continued as a consultant for Cummins from 1961-1996. In 1974, Rand created the “Dancing Cs” logo letterhead, signage, visitor maps, and architectural tour markers for the Columbus Area Visitors Center. The Dancing Cs branding has been incorporated in several designs, including tour buses, the Commons play area’s Luckey Climber, as well as a popular bike rack design.

Paul Rand’s most widely known works are the corporate identities, many of which are still in use, for IBM, ABC, Westinghouse, UPS, and Cummins Engine.

Rand had a unique ability to clarify how his corporate identities would meet his clients’ needs.

Fellow designer Louis Danziger said Rand “almost single-handedly convinced business that design was an effective tool. Anyone designing in the 1950s and 1960s owed much to Rand, who largely made it possible for us to work. He, more than anyone else, made the profession reputable. We went from being commercial artists to being graphic designers largely on his merits.” 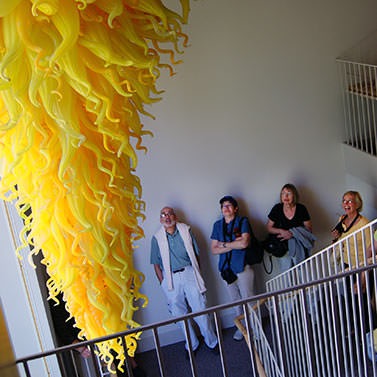 This nine-foot-tall glass chandelier is made up of 900 pieces of glass in four shades of yellow.

When it was installed, Dale Chihuly was about a year from creating his first major exhibition, in Venice.

Stop by in the evening and view it from outside, when the chandelier shows off its unique feature – it’s illuminated by neon tubes inside!

The accompanying Persians were named by Chihuly, who simply thought the name fit the shapes.

Want to own your own piece of Chihuly glass? The Visitors Center is one of the few places where you can purchase original Chihuly glass work and prints, in the gift shop.

Take me to the Chandelier and Persians. 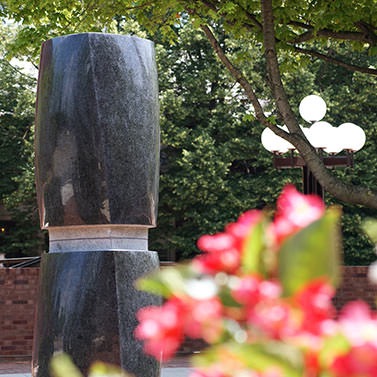 The sculpture is an obelisk from two stacked stones, creating a modern and minimalist interpretation of a totem, an ancient symbol of community, gathering, and family.

The library’s stone steps came from the same quarry as these granite stones.

Take me to Modern Totem. 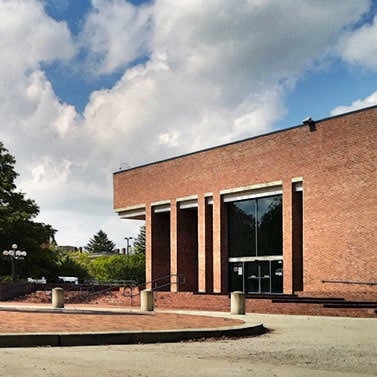 An early project in I.M. Pei’s career, he wanted the library design to be seen as quiet, dignified, and accessible to persons of all ages.

Pei also wanted the public plaza to create an urban space – he convinced the community to close Lafayette Street between the library and Irwin Gardens to accomplish this.

I.M. Pei is also known for his design of the Louvre Pyramid in Paris, the John F. Kennedy Library in Boston,  and the Rock & Roll Hall of Fame in Cleveland. He received architecture’s highest award, the Pritzker Prize, in 1983.

The 1987 addition in the back is by local architect Jim Paris, who conferred with Pei during the process. 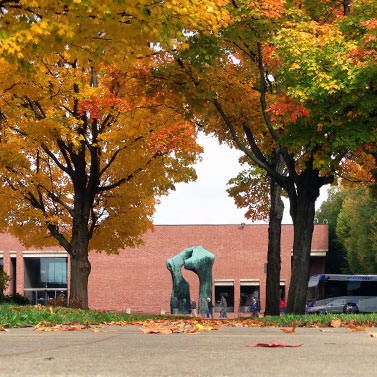 Henry Moore was asked to design a sculpture of the library plaza at the suggestion of I.M. Pei, architect of the library, who thought that a work placed there should serve as focal point as well as a counter-balance to the modernist structures that surround it.

The site and size of the work encourages people to walk around and through the sculpture, as Moore intended, “As a young sculptor, I saw Stonehenge and ever since I’ve wanted to do work that could be walked through and around.”

Moore is considered the most prominent sculptor of the 20th century, and this is his largest work in the United States.