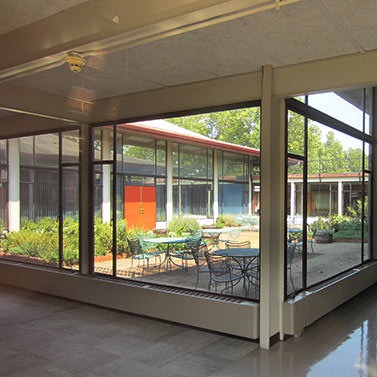 John Carl Warnecke designed McDowell in 1960 as an elementary school with four cluster buildings that had three classrooms each and connecting open-air walkways.

The site was named a National Historic Landmark (one of the seven in Columbus) in 2000 for its development of modernism in architecture and landscape architecture.

McDowell was the first school built under the “park school” concept, with adjacent land and the building utilized year-round as a neighborhood playground.

Originally designed to serve elementary students, the school’s flexibility was demonstrated by the 1983 conversion to an adult education facility.

The school is named in honor of Miss Mabel McDowell (1880-1961), an elementary school teacher in Columbus for 25 years.

Take me to McDowell. 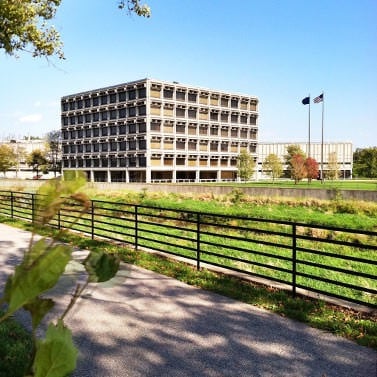 The research and engine testing facility utilizes modular, pre-cast concrete panels to create the exterior curtain wall, a method used in several other Cummins buildings. In contrast, the concrete of the six-story office building was poured floor by floor. Oblong pre-cast concrete forms provide sun screening for the glass windows in each floor. The office interior features formed pre-cast concrete which incorporated the mechanical and electrical systems.

The area around the Technical Center has been landscaped by Dan Kiley with trees, grass, pools, and plantings. Kiley also designed the rows of London Planetree lining Central Avenue (Haw Creek Boulevard) and the plantings around the Cummins Columbus Engine Plant and the former Cummins Health Center, seen across the boulevard.

Take me to Cummins Tech Center. 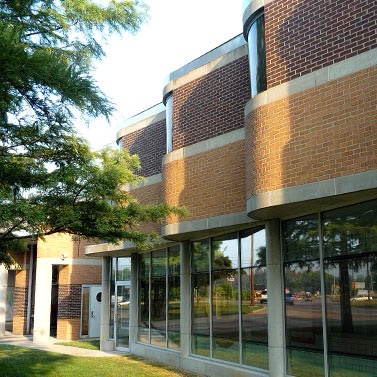 The original Fire Station One was designed by Columbus native Leighton Bowers in 1941 (one year before First Christian Church) in the Art Deco style, with curved glass corner of buff brick, limestone, glass, and stainless steel.

Bowers (1894-1944) practiced in Fort Wayne until he moved to Indianapolis in 1933, where he served as an architect for the state of Indiana. His Fort Wayne designs include the NIPSCO Office Building and the Gaston F. Bailhe House.

The addition and renovation was completed by Columbus architects James K. Paris and Nolan Bingham in 1990. Michael Van Valkenburgh contributed the landscaping design.

The 1990 addition was by Columbus architect Jim Paris, who maintained the horizontal lines and two colors of brick.

The station also houses and maintains the first diesel engine fire truck in the country – you can often see it parked in one of the Washington Street bays and is a popular feature at special community events.

Take me to Fire Station One. 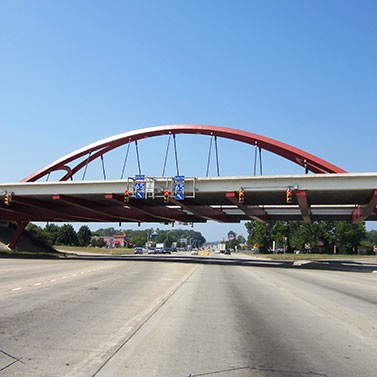 The first project to come out of the proposal for a “front door” project was Jean Muller’s twin-arched overpass bridge at the I-65 intersection, in 1997.

A twin-arched overpass bridge, the red arches emerge between the two interstate lanes, with rods supporting cantilevered beams below the concrete roadway.

The unique signal-controlled diamond interchange below was a new concept for Indiana. The interchange was less expensive than a conventional cloverleaf and requires less right-of-way.

Take me to Gateway Bridge.

Return to the mobile map directory.