Pick up a free, printed guide and map to the stops on this tour at The Visitors Center in downtown Columbus at 506 Fifth Street, right next door to the public library. 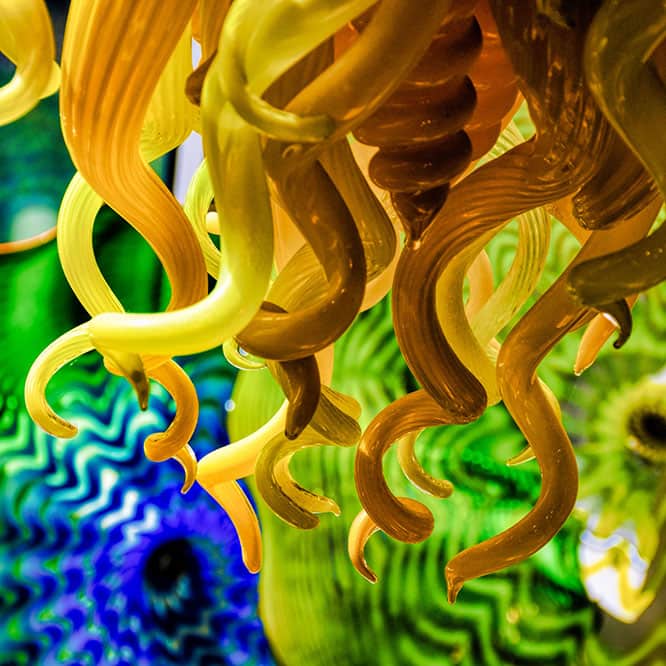 Head to the stairwell in the Visitors Center and head up the stairs to get a close look at Dale Chihuly’s 900-piece Chandelier and Persians.

Watch a kid-friendly video about the Columbus story. Just ask any staff member, they’ll start it for you at any time.

Then, explore the gift shop which has toys and books for kids! 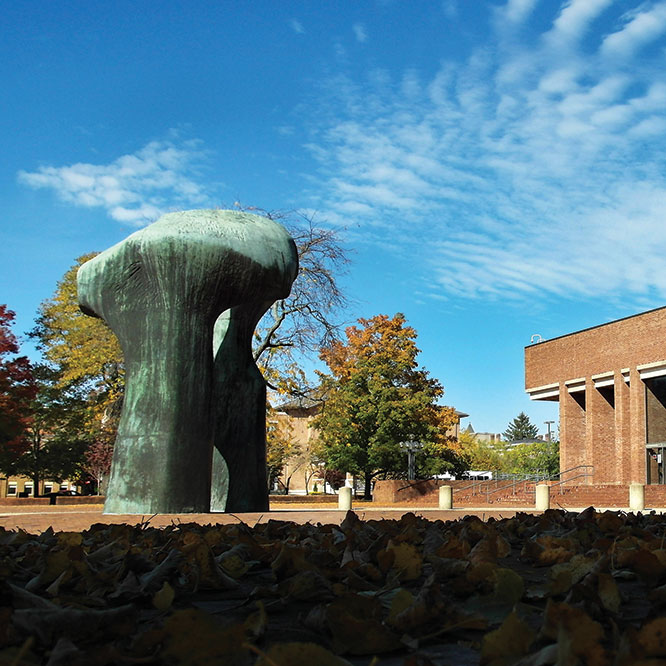 Artist Henry Moore was asked to design a sculpture of the library plaza on the suggestion of I.M. Pei, architect of the library. Pei thought that a work placed in the plaza should serve as focal point as well as a counter-balance to the two modernist structures that surround it.

This is the largest Henry Moore sculpture in America. 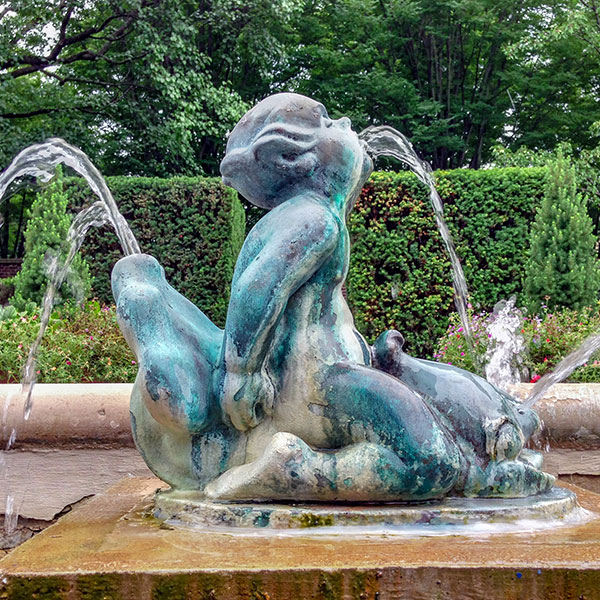 Open and free to the public Sunday and Tuesday afternoons, from June to October.

Built in 1864 by Joseph I. Irwin, Columbus banker and businessman, this Italianate home was renovated and expanded in 1910 to accommodate four generations of the Irwin family.

This property played a dramatic role in the history of Columbus. Clessie Cummins served as chauffeur to the Irwin family – it was on this property that he began tinkering in the garage and developed an idea for a high-speed diesel engine. With the backing of W.G. Irwin, his ideas became the cornerstone of Cummins, Inc., now a Fortune 200 company. (The greenhouses on the north side replaced the family’s garage.) ​

W.G. Irwin’s great-nephew J. Irwin Miller, who was born and raised in this house, had the vision, along with his wife Xenia, that ultimately led to the collection of modern architecture in Columbus, Indiana.

Step inside the public lobby of Cummins global headquarters to view displays that tell the story of Cummins and its diesel engines.

The centerpiece of the museum is a large engine that has been disassembled into its four hundred parts and suspended by steel cables over a two-story space. The one-of-a-kind “Exploded Engine” installation is sure to make an impression – a reviewer from Yelp said, “It looks like an exploded drawing of the engine in three dimensions.”

You also can see and touch full-sized engines, a full-size pick-up truck hanging vertically near the ceiling, and a full-size vintage Cummins Indy 500 car.

The museum is located in the public lobby of the corporate headquarters in downtown Columbus. The museum is open weekdays. 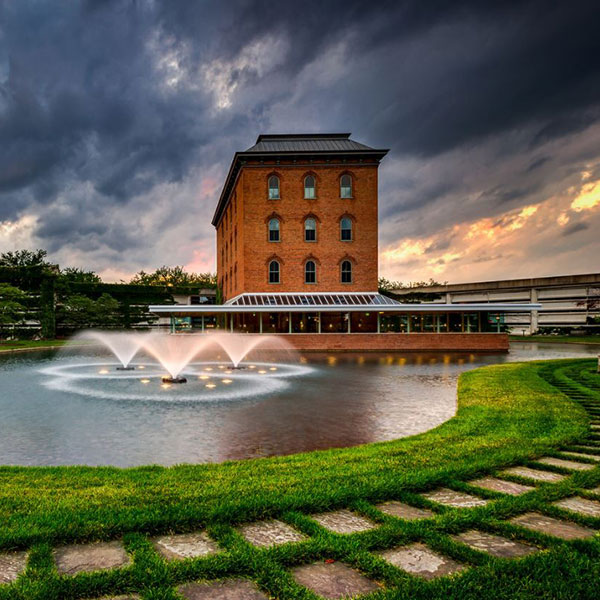 Head just a half block north, up Jackson Street, and you’ll come across a beautiful public area that is a nice place to just relax and enjoy the setting – especially the pond and its fountains, and the long arcade of columns.

This is also a popular backdrop for a selfie to commemorate your trip to Columbus! 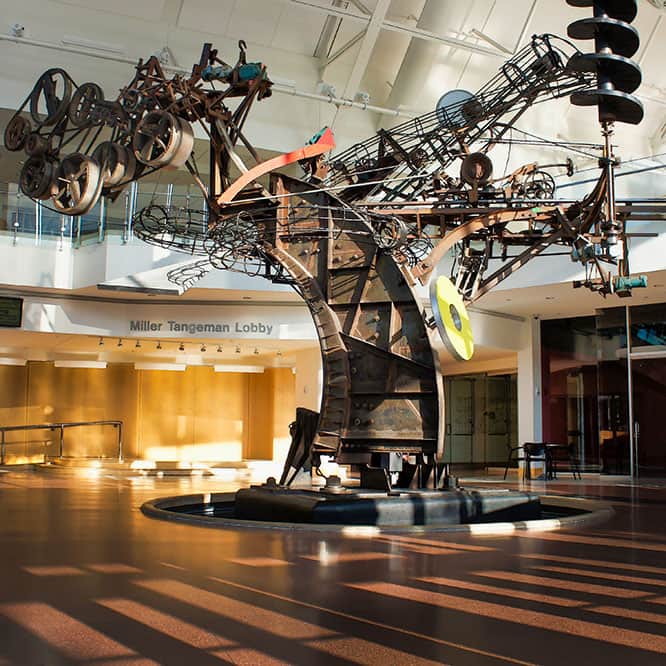 The kids will be impressed by this monstrous sculpture that’s made enitrely out of junk parts! It was created by famed Swiss sculptor Jean Tinguely, who used parts from local scrap metal salvage yards to come up with the elements in his wild creation.

The sculpture is so beloved by the community that, when the previous Commons needed to be replaced, Chaos was encased in a protective and temperature-controlled box, then the old Commons was demolished all around it, and the new Commons went back up, all around it! 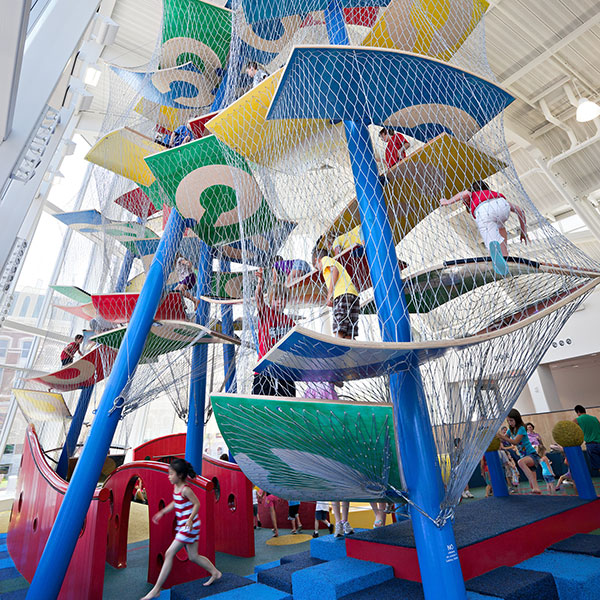 Free to the public – Columbus’ largest piece of public art and jungle gym, supported by five steel columns, and fifty interconnection, custom-designed plywood platform. The platforms are connected with six miles of coated stainless steel aircraft cable to provide additional support and a netting to create a safe climbing structure. Note the version of Dancing Cs and the city’s branding colors decorating the underneath of the plywood platforms.

Designed by Tom Luckey, a designer and architect, the piece was installed by his son, Spencer Luckey. 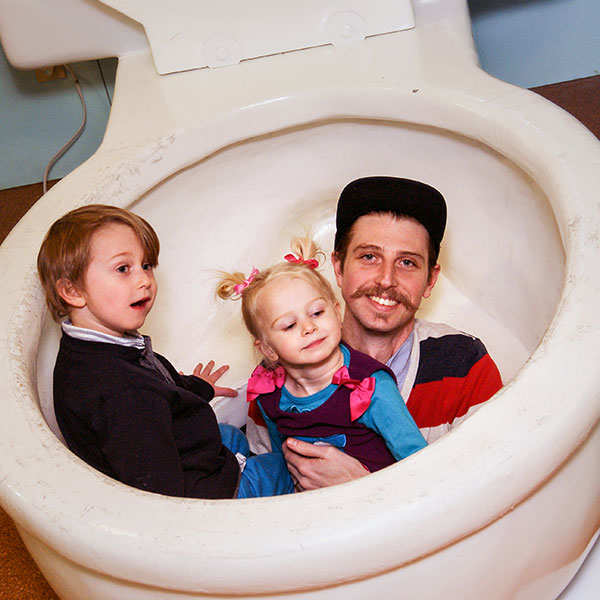 Kidscommons has an admissions charge.

​There are so many things for kids to discover at kidscommons :

Camp kidscommons, the newest exhibit at kidscommons! This outdoor-inspired adventure will have you searching the treetops for Indiana creatures, crawling through underground tunnels, teach you basic outdoor survival skills, and provide a wide range of natural exploration all at kidscommons! ExploraHouse, home to the famous giant toilet, is a space to discover the ‘ins and outs’ of a house. Learn about light sources, visit the infrared kitchen, and climb through the chimney to the attic. Design your own city! Discover the innovation of architecture and urban design in Columbus while planning your community of the future. Investigate the science of optics and music with the Gateway Bridge Laser Harp! This unique harp and first of its kind in its style allows visitors of all ages to play music while ‘strumming’ invisible strings.

Try out the robotic arm, which is made to human proportions and allows kids to manipulate the mechanical shoulder, elbow, wrist, and fingers. Kids on the Move is home to interactive components that provide hands-on education regarding healthy choices we make about exercise and our diet. It is also home to the popular grocery store. Kids-At-Art brings out the creativity in kids of all ages through the use of recycled materials and various art media. Create a masterpiece to take home as a souvenir.

Stand inside the body bubble or try various shaped wands in the big tank. Can you make bubbles that aren’t round? The climbing wall is a seventeen-foot wall that replicates the front of the building and is designed for ages five through adult. Climbers must be 44 inches tall and have a signed parent or guardian release form. This exhibit has an additional $3 fee per climber and is subject to availability. Early Childhood Garden is full of the sights and sounds of Indiana wildlife, a child-size camper, and a hollow Sycamore tree—the perfect spot for an afternoon story or imaginary play. 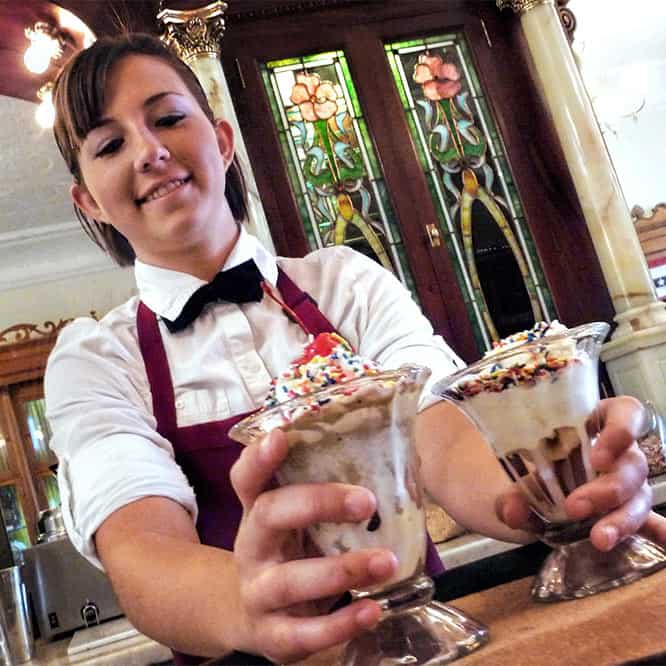 After the kids have burned off all that energy at the Commons playground, treat them at an ice cream parlor that’s been beautifully restored to its original 1900-style condition, including a working orchestrion and a museum of soda fountains and musical instruments.

If there’s one must-see place in Columbus with kids, this is definitely it and it’s definitely a place you have to see to believe! 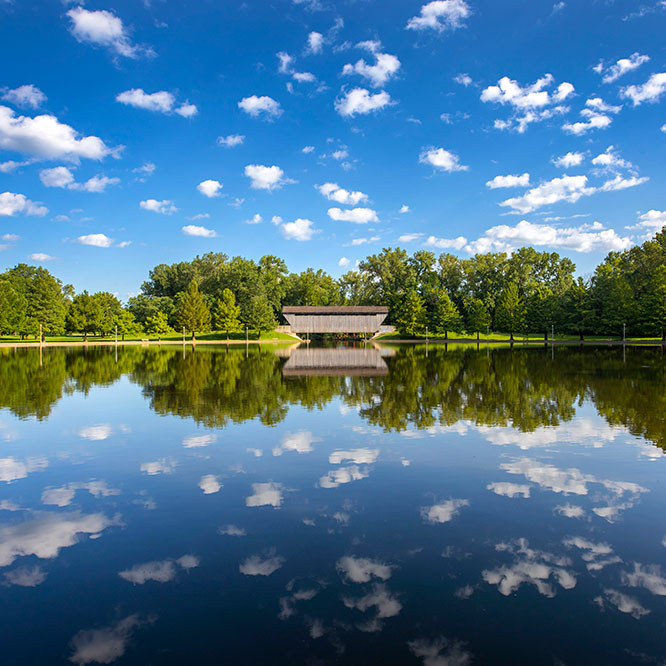 Mill Race Park sits right on the Flatrock River and was designed by Michael Van Valkenburgh, and features playful structures by Stanley Saitowitz, including an 84-foot observation tower, a covered bridge, people trails, picnic shelters, playground equipment, and an amphitheater that hosts concerts and performances.

It’s a great place to get out and explore, with plenty of walking paths and direct access to the People Trail.

You may also enjoy…