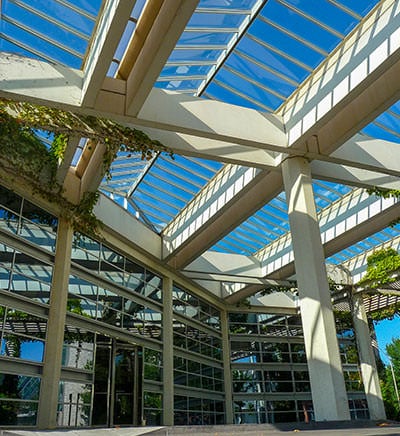 Along with Harry Weese, Architect Kevin Roche has contributed the most buildings to the legacy of the Columbus architecture story – view them all below.

On a single corner, at Fifth and Jackson Streets, Roche fans can view three Roche originals – Cummins Corporate Headquarters, his Post Office, and the addition to Irwin Union Bank and Trust, to which he was also the design associate to Eero Saarinen (see it on Google Streetview).

“In the field of architecture, crowded with outsized egos and fractious rivalries, Kevin Roche is an anomaly. Over the course of a career spanning seven decades, this Irish architect has designed more than two hundred significant buildings, received the greatest accolades his profession accords, and is held in the highest regard by his peers – yet his name is little known to the general public.” – by Michael Gray, The Irish Echo newspaper 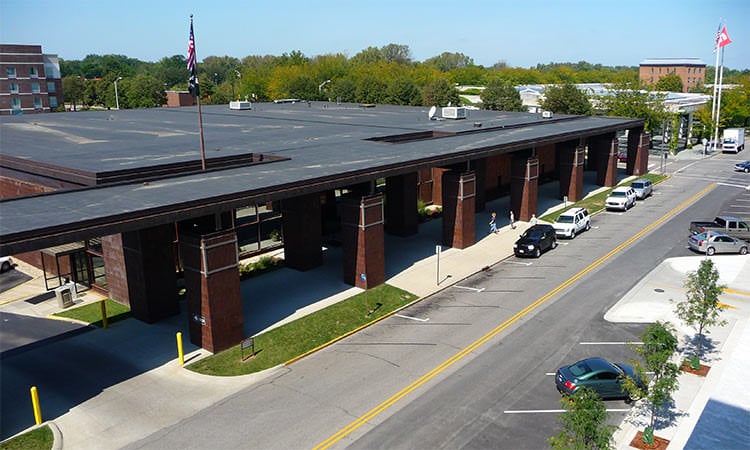 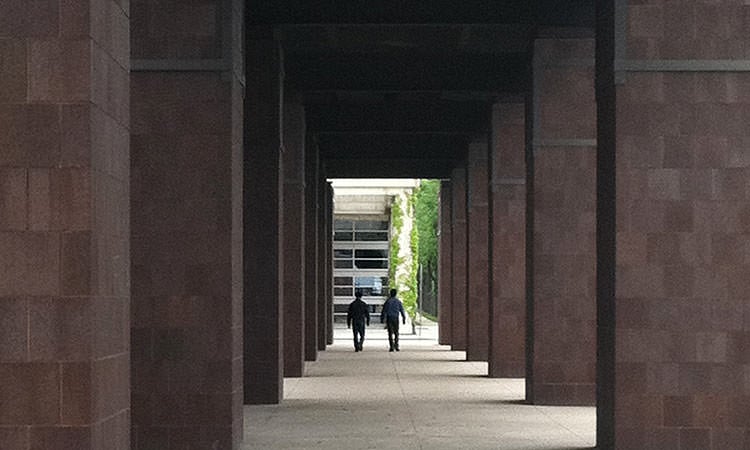 The Columbus Post Office, designed by Roche Dinkeloo in 1970, was the first post office in the country designed by architects whose fees were privately funded. It is built of a salt-glazed tile, mirrored glass and COR-Ten steel. The tile was glazed reddish brown to match the color of the steel. Outer walls are mirrored to provide interesting reflections. From the interior, the walls are see-through. Inside, high ceilings provide a feel of spaciousness. 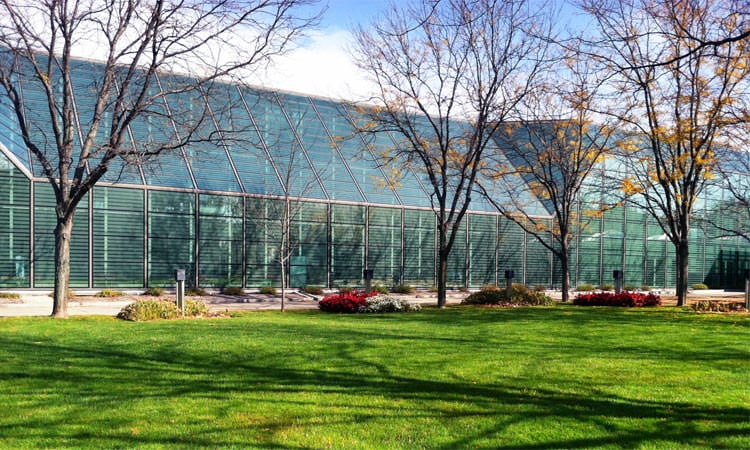 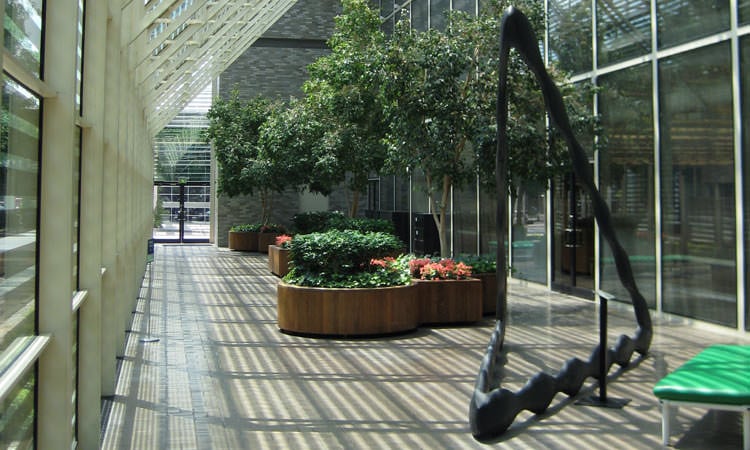 The three-story office building, by Kevin Roche, is an addition to the former Irwin Union Bank designed by Eero Saarinen. The predominately glass building relates to the original building, connected with a glass corridor/galleria that was originally a public pass through. The original glass was replaced in 2012 with the horizontal strips composed of ceramic frit dots to reduce the heat gain in the enclosed galleria. Landscaping was by Jack Curtis, who also designed the landscaping of the main offices across Jackson Street.

Cummins purchased the building in 2011 and now houses additional downtown offices within. The interior has been renovated with open office areas and a variety of enclosed meeting rooms to encourage collaboration.

The building interior features exposed steel trusses, due to the low floor-to-floor height to match scale of the adjacent 19th-century buildings. The open floors are kept column free with long-span trusses and by placing the building support rooms (stairs, elevators and restrooms) in brick enclosures at both ends of the building. The grey brick was the same brick originally selected by Saarinen to face the side of the adjacent building.

In 1989, the bank was enlarged further by renovating two buildings to the north with cast iron columns and glass Victorian facades. Kevin Roche directed the renovation of these buildings, one of which was designed by prolific local architect Charles F. Sparrell.

Cummins purchased the building in 2011 and it now houses downtown offices. The interior has been renovated with open office areas and a variety of enclosed meeting rooms to encourage collaboration. 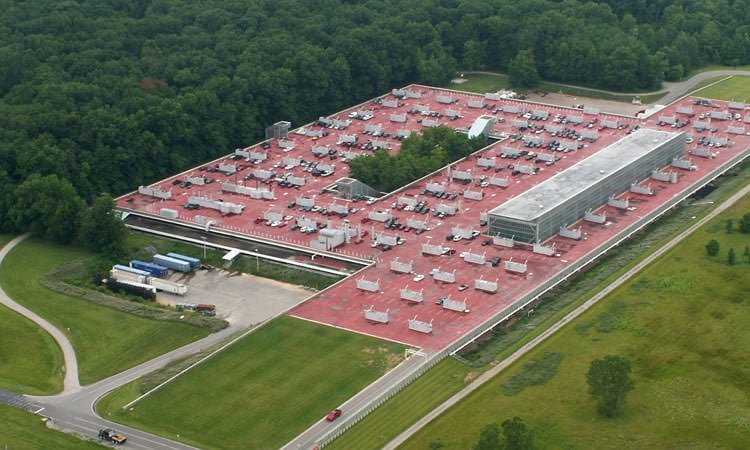 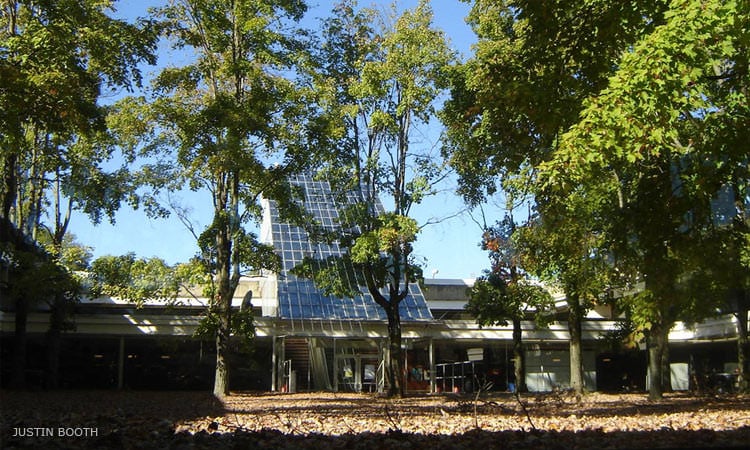 To preserve the surrounding wooded site, this 13-acre building is depressed into a clearing and features parking on the roof. The main floor of the building is actually two levels with the manufacturing floor three feet lower than the office areas, which surrounds it on three sides. There are three roof-top glass entry structures, two are secured employee entries with stairs and escalators, the other is a visitors entry with an elevator.

The layout of the plant provides all occupants with a view of the outside. In the middle of the manufacturing area is a landscaped courtyard completely surrounded by glass. Light and views of the outside environment are facilitated with a slanted glass roof at the cafeteria, located in the southwest corner of the building.

One of the main goals in the building design was the preservation and enhancement of the environment for those using the facility. As a result, special attention was given to creating an environmentally controlled system of air, noise, and water pollution control devices which surpassed industry standards at the time. This factory was proclaimed a prototype of future factory buildings in the early 1970s.

Since the manufacturing and assembly areas were designed to be highly flexible and efficient, the original component machining and assembly equipment were easily removed to allow assembly lines utilizing computerization and robotic systems to build the midrange engines, without impacting the building’s architecture. 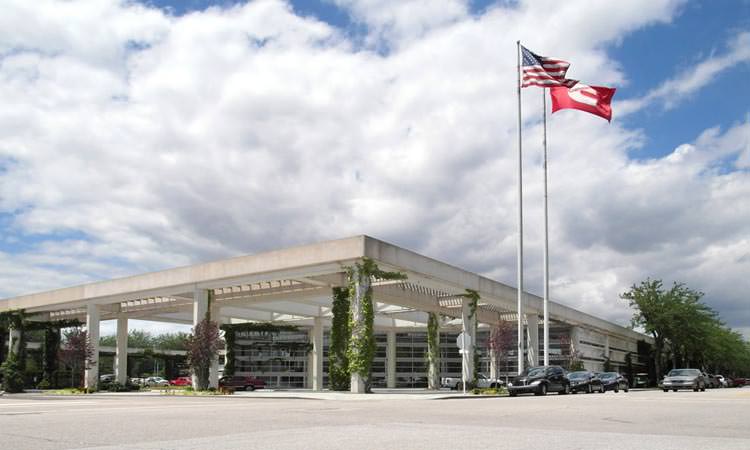 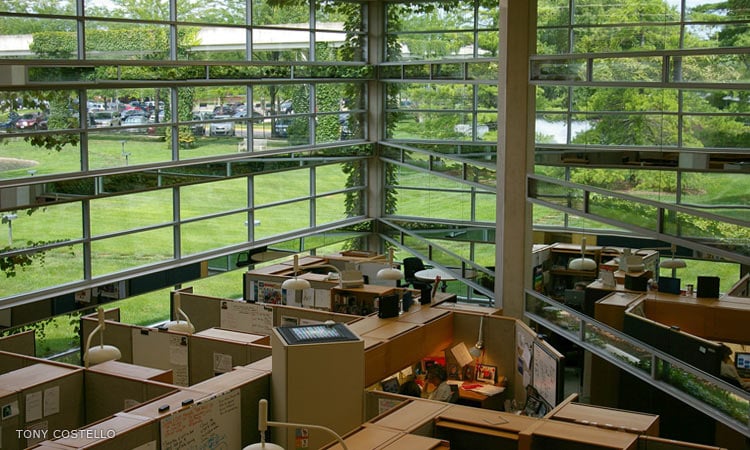 Designed by Kevin Roche (Kevin Roche John Dinkeloo and Associates) the Cummins Corporate Office Building, completed in 1984, serves as the world headquarters for Cummins, Inc., a Fortune 500 Company and diesel engine manufacturer. The one-story building with a mezzanine level occupies three blocks in downtown Columbus. The zigzag plan configuration interacts with a park-like setting on the east side of the building, defined by a portico surrounding the four-story historic Cerealine building, which serves as the employee cafeteria. The office building is primarily cast-in-place octagonal concrete columns with infilled precast concrete spandrels and narrow windows to provide noise and sun control.

Landscape Architect Jack Curtis created the park-like setting for the Cummins corporate headquarters and the project received an Honor Award from the American Society of Landscape Architects. The central park area features glory maple, sugar maple, Boston ivy, birch, redbud, and dogwood. In the summer months, the park is lush and green, while the climbing hydrangea bloom on the columns surrounding the building. Located at Fifth and Jackson Streets. 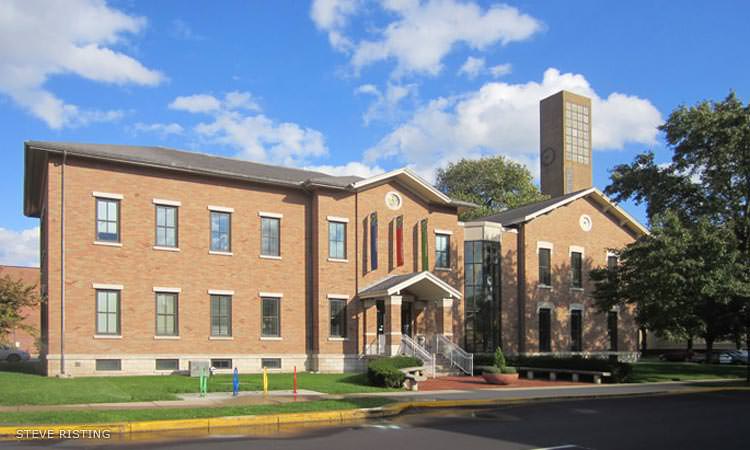 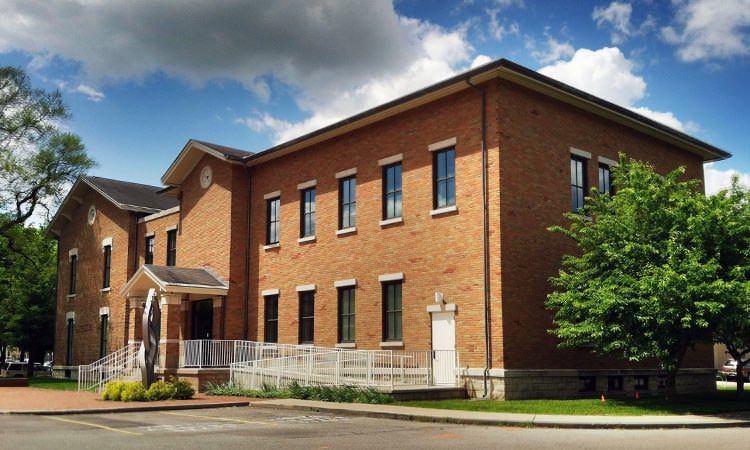 The Columbus Area Visitors Center was the home of John Vaulter Storey in 1864. The building style is Italianate and the building materials are brick and limestone. The building has long rectangular windows, bracketed eaves, and window hoods. In addition to being a home, it later served on separate occasions as a lodge for the order of Red Men, a furniture store, a Boy’s club and an office. It opened as the Visitors Center in 1973. The expansion was designed by Kevin Roche and was completed in 1995. The Yellow Neon Chandelier and Persians, designed by Dale Chihuly, hangs in the bay window. 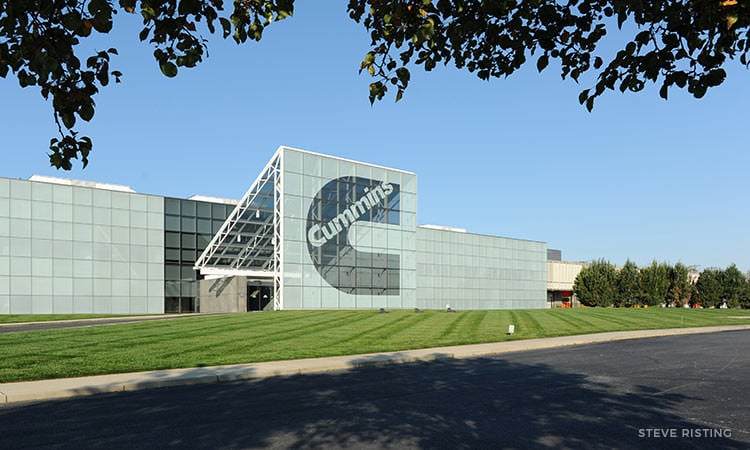 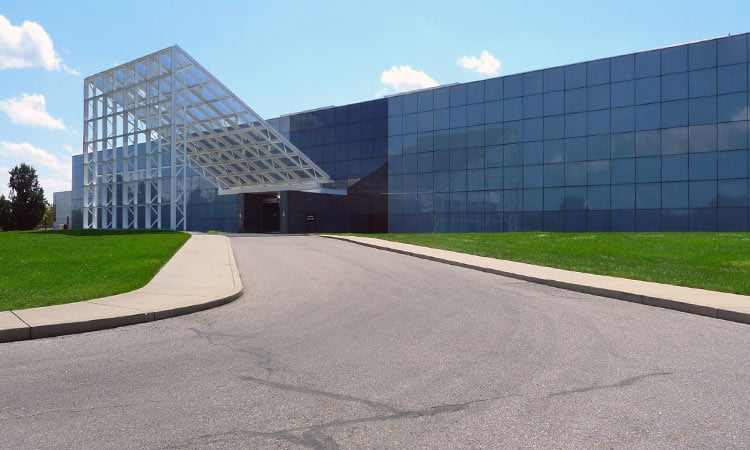 Cummins main engine plant has been in the same location for over 70 years and has grown to 1.3 million square feet. Kevin Roche was asked to renovate the existing plant, design an office addition, and create a new entry on the east side facing Central Avenue. 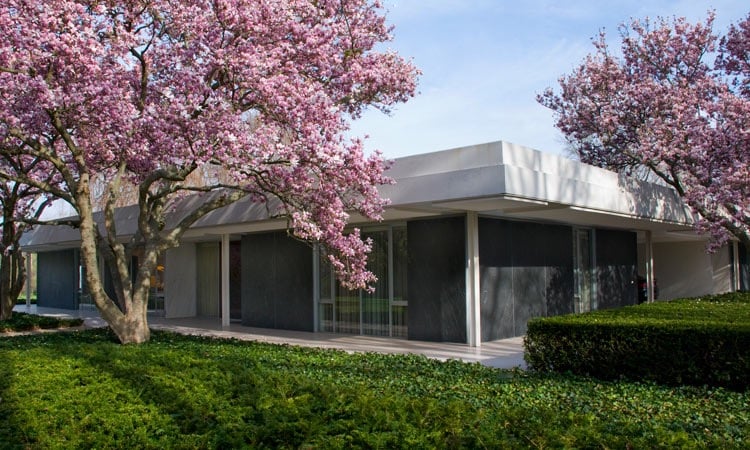 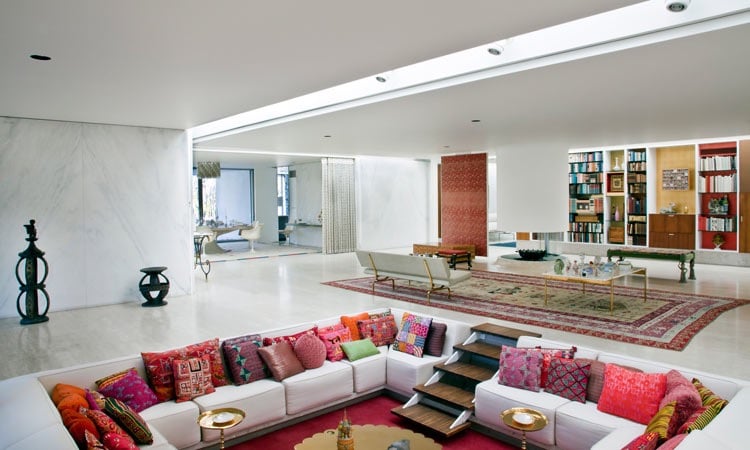 The Miller House is located in a residential neighborhood and not accessible by the public – entry onto the property is obtained via tours, which start at the Columbus Visitors Center.

Find out much more about Miller House and Garden HERE.

The Miller House and Garden is the collaborative masterpiece of Eero Saarinen, Alexander Girard, Dan Kiley, and their patrons, J.I. and Xenia Miller.

Travel + Leisure magazine said the “Miller House ranks alongside Frank Lloyd Wright’s Fallingwater, Ludwig Mies van der Rohe’s Farnsworth House, and Philip Johnson’s Glass House as a hallmark of Modernist design (and) it is surrounded by some of the most beautiful Modernist gardens in the United States, created by landscape architect Dan Kiley.” Read what the press has been saying about Miller House and Garden HERE. 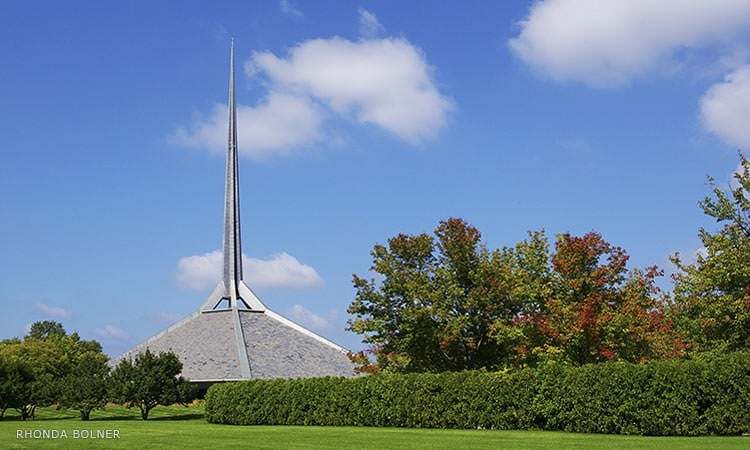 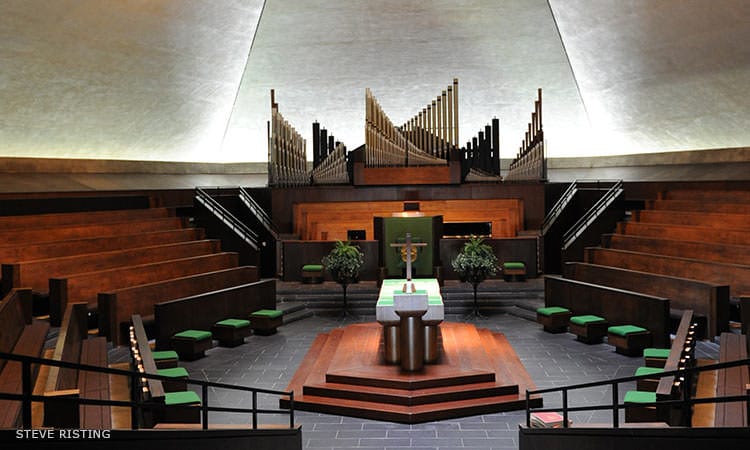 Other Kevin Roche projects in Columbus

“In 1982, Kevin Roche stood at a podium to deliver his acceptance speech after receiving the Pritzker Prize, often considered the Nobel Prize of architecture.

It was a perfect moment for a little bit of self-congratulation, but instead Roche simply took a slip of paper from his pocket and read aloud a letter an irate woman had sent him tearing apart his life’s work and declaring that the members of the Pritzker committee “must be out of their minds”. He returned the note to his pocket and quietly walked off the stage.

It was a typical act of humour and humility by a man who, though still relatively unknown in Ireland, has been acknowledged as a key player in the history of American and Western architecture…”

From the New York Times Obituary

“Mr. Roche was one of the rare architects who was admired and trusted by corporate executives, museum boards and government officials, who allowed him wide leeway in expressing his restless formal imagination.”

“The Metropolitan Museum of Art was not Mr. Roche’s only long-term client. One of his most important legacies from Saarinen was his relationship with J. Irwin Miller, chairman of the Cummins Engine Company and a patron of architecture. Mr. Miller had transformed Cummins’s hometown, Columbus, Ind., into an architecture mecca, with buildings by both Saarinen and his father, Eliel Saarinen, in addition to others by I. M. Pei, Robert Venturi (who died in September), César Pelli, Richard Meier, and Skidmore, Owings & Merrill.

Mr. Roche met Mr. Miller when Mr. Roche was put in charge of the house in Columbus that Saarinen was designing for the Miller family, an assignment that confirmed Mr. Roche’s importance in the Saarinen office. After Saarinen’s death, Mr. Miller began to turn to Mr. Roche for commissions.

Mr. Roche designed numerous projects for Cummins, including its corporate headquarters. Although he usually declined to do private houses, he, like Saarinen, made exceptions for Mr. Miller; in 1982, he designed a lavish residence for him and his wife, Xenia Simons Miller, in Hobe Sound, Fla.”

“The Pyramids,” another work by Kevin Roche, can be seen nearby on the north side of Indianapolis