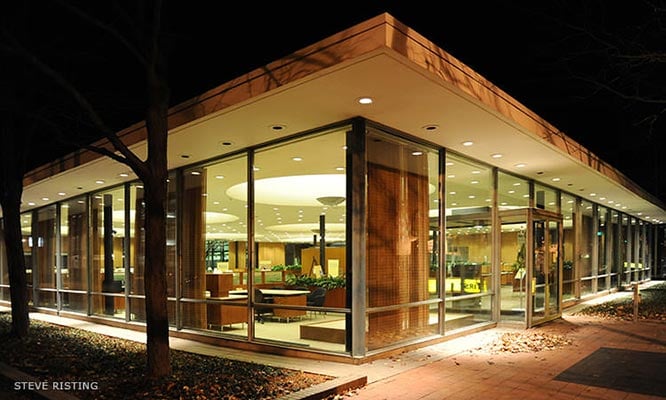 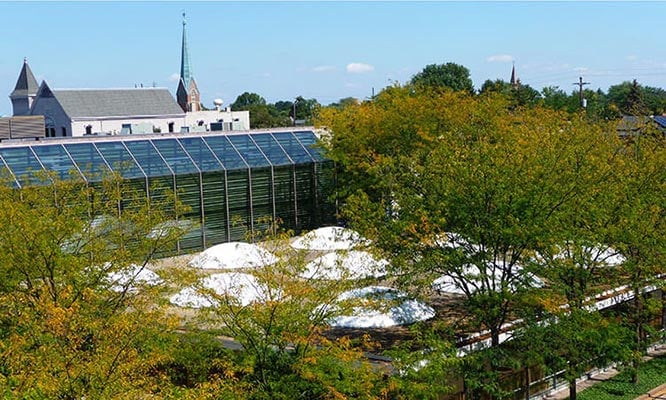 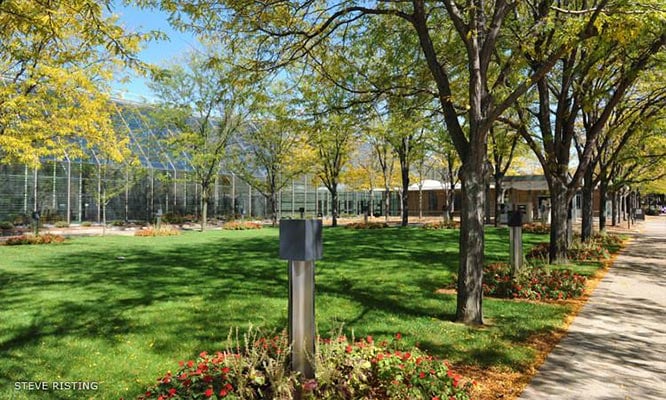 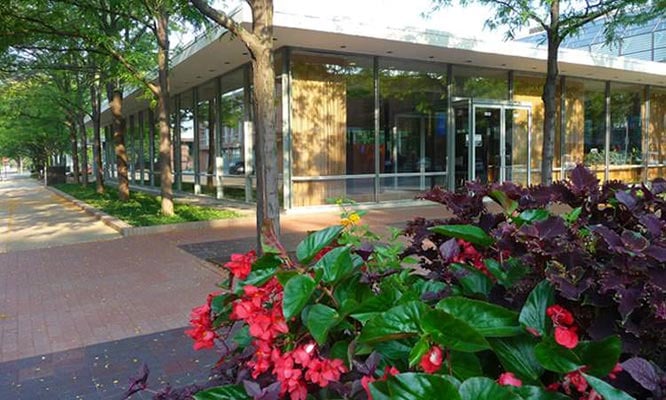 Cummins Inc. Irwin Conference Center was designed by Eero Saarinen in 1954, with landscape design by Dan Kiley. It is a low, glass-walled building set in a grove of trees. Unusual domed lights and an open interior creates a large, open room and a feeling of openness and friendliness. The modern bank is linked to the 1910 office building and three-story building by a three-story glass arcade, which was designed by Kevin Roche and added in 1973.

Largely controlled by the Irwin-Sweeney Miller family, the bank was led by J. Irwin Miller, who also was the top executive at Cummins Engine Company. Having become friends with Eero Saarinen during construction of the First Christian Church, Miller turned to Saarinen to design their new bank building.

Miller wanted a building that would change people’s concepts of banking. Saarinen worked with Miller to develop a building that would welcome customers rather than intimidate them. There was a deliberate lack of partitions and offices. Miller said that he wanted customers to see what the bank was doing with their money. The one-story glass pavilion became one of the first open plan and transparent banks in the country, a dramatic contrast to the typical classical stone banks.

Flooring in the lobby and corridors was a one inch thick glazed, split paving brick in a rustic buff color, chosen to hold up to heavy traffic flow and to make customers feel comfortable walking into the building whether they were coming from a factory, a farm, or an office. Window coverings were continuous, floor-to-ceiling reed blinds also selected by Saarinen.

Dan Kiley’s original landscaping surround the main banking lobby with trees in what Saarinen called an “office in a garden.”

After the demise of Irwin-Union Bank in the midst of the economic crisis, the bank  was acquired by First Financial Bank, which decided to build a new downtown banking center and sold the property to Cummins Inc. Much of the adjoining building space has been converted to offices, but the former bank lobby is now being used by Cummins as a conference and hospitality center as well as flexible work space when there is not a scheduled event in the building. Although the former bank lobby space has been reconfigured, Cummins has strived to maintain as much as possible of the original architecture and has left many remnants of the former banking facility in place.

The peacefulness and beauty along with stunning architecture will instill a remembrance of your visit to Columbus not to be forgotten! A must, and this is on the Architectural Tour also!

Awesome! In lots of travels, we have visited and admired many churches. This one, without a doubt, is the most unusual we have ever seen. Both the outer structure and the inner structures of this holy place are awesome. It is another outstanding example of the progressive architecture typical of Columbus.

This is a mid-century masterpiece by Eero Saarinen. Well worth a visit to Columbus, and there’s plenty more architectural projects to see while there!