THE HARRY WEESE LEGACY IN COLUMBUS 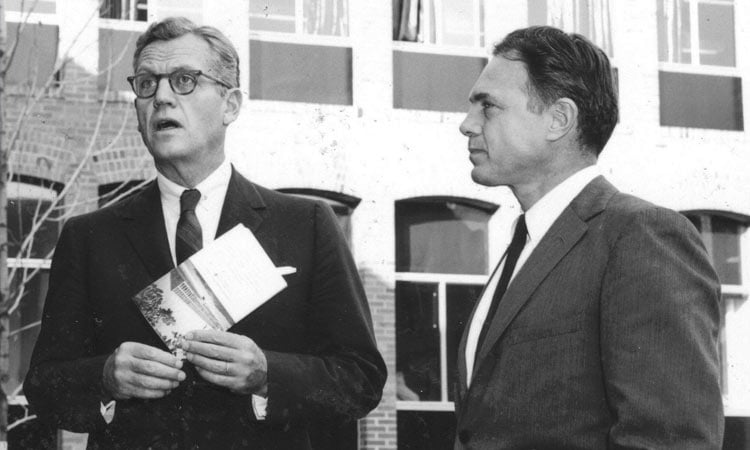 Chicago architect Harry Weese designed more buildings in Bartholomew County than any other architect in the 1950s and 1960s. It was his design for Lillian C. Schmitt Elementary that laid the early foundation for the Cummins Foundation’s architectural program. The program was formalized in 1960 when Chicago-based Weese designed what is now known as Northside Middle School.

Weese attended MIT and Yale Schools of Architecture, graduating from MIT in 1938. After graduation, he was awarded a fellowship in city planning at Cranbrook Academy in Bloomfield Hills, Michigan. After a stint at Skidmore Owings, and Merrill and a tour of duty in the Navy, he returned to SOM. In 1947, he opened his own firm, Harry Weese Associates.

“Weese was known as a highly independent and imaginative architect. Educated at MIT and Yale University, Weese joined the Cranbrooke Academy and developed a close relationships with Eero Saarinen. This relationship helped introduce Weese to the burgeoning architecture program in Columbus.” – from Architect’s Gravesites, by tour guide Henry Kuehn

His buildings in the county are well-recognized landmarks. They include:

From the book J. Irwin Miller, The Shaping of an American Icon :

“Harry Weese, a prolific Chicago architect who had studied at Cranbrook with Eliel Saarinen, had designed the first of the modern Columbus schools in 1957. Years later, he began work on the Washington, DC, Metro system, finally completed in 1976 — a network of stations deemed by critic Herbert Muschamp to be among the greatest public works of the twentieth century.”

Harry Weese, who designed the Cummins Tech Center, is important in this small, architectural mecca because, with 16 local structures to his name, he reigns among the most prolific high-profile designers in Columbus.

Nationally, he was celebrated for such edifices as the massive Washington Metro subway system, the focus of an American Institute of Architects’ 25-year award. Weese died in 1998 at age 83 after substantial professional success and equal personal struggles, including a prolonged battle with alcohol.

The Illinois native boasted more than 1,000 buildings on his resume. But Columbus’ 16 projects, including several structures for Cummins, gave an upstart Weese a national name in the 1950s alongside other design heavyweights and friends such as Eero Saarinen, the creative mind behind the Miller House and North Christian Church.

Bloomington architect Marleen Newman looks at the designs of Weese — the man who gave Columbus the medieval-flavored First Baptist Church and the homestyled Schmitt Elementary School, among other structures — and struggled to find the right words to describe his impact here and nationally.

“He was a genius,” said Newman, referring especially to his casual, 15-minute building scribblings featuring minute details from which working drawings could sprout. “You cannot imagine all of his ideas and sketches and how prolific he was. I wonder how he ever had time to sleep.”

And it was Columbus that gave him his launching pad.

“He was treated like a lion in Columbus,” said Robert Bruegmann, the Chicago-based author of the tribute book, The Architecture of Harry Weese.

“I’m not sure he would have done his other works without Columbus,” Bruegmann said.

Bruegmann was the keynote speaker at a 2014 symposium that highlighted Weese’s work here. He spoke in part on Weese’s relationship with Saarinen and with J. Irwin Miller, the catalyst for attracting top designers to work in Columbus.

Though Weese and Saarinen were friends, Saarinen once wanted to fight Weese in the late 1930s when Weese had a few different designs — on Saarinen’s girlfriend, according to Bruegmann.

However, the architectural world — which cheered Weese as a star in the mid-1970s — dumped him by the 1980s when younger colleagues brought their whimsy to bear on emerging, post-modern influences. Bruegmann said they were fanciful influences that Weese hated.

“He accepted influences from all over the place near the beginning of his career,” Bruegmann said. “But he seemed to have gotten fixed in one particular mode.”

Kelly Wilson, director of the Indiana University Center for Art and Design, is fine with that one mode of modernism. When he began studying design in the 1970s, Wilson rarely heard Weese’s name.

But when he moved here a few years ago and first walked into First Baptist Church, he saw the structure’s 45-foot, V-shaped ceiling looking as if heaven’s arms were reaching down. And then he saw the man’s greatness.

“Every time I walk into that sanctuary, I take a breath in,” Wilson said. “And everybody I know who’s seen it agrees that the designer was a person who knew how to reach deep into the human psyche to touch something common to all of us.”

Weese exhibited that touch with Schmitt Elementary as well as anywhere else, according to Wilson. There, Weese used something of a trademark here — a gabled roof on the front, looking very much like a home.

“He had a kit of parts (he used),” Wilson said. “Look at Schmitt. It’s amazing. Here’s a building for kids, many of whom are leaving their mothers and homes for the first time. And he decided to put them into something they already were familiar with — a house.”

Apparently for Weese, the warmth already reigned — right in his basic designs.