From Cash to Coffee at Irwin Union Bank and Trust Building 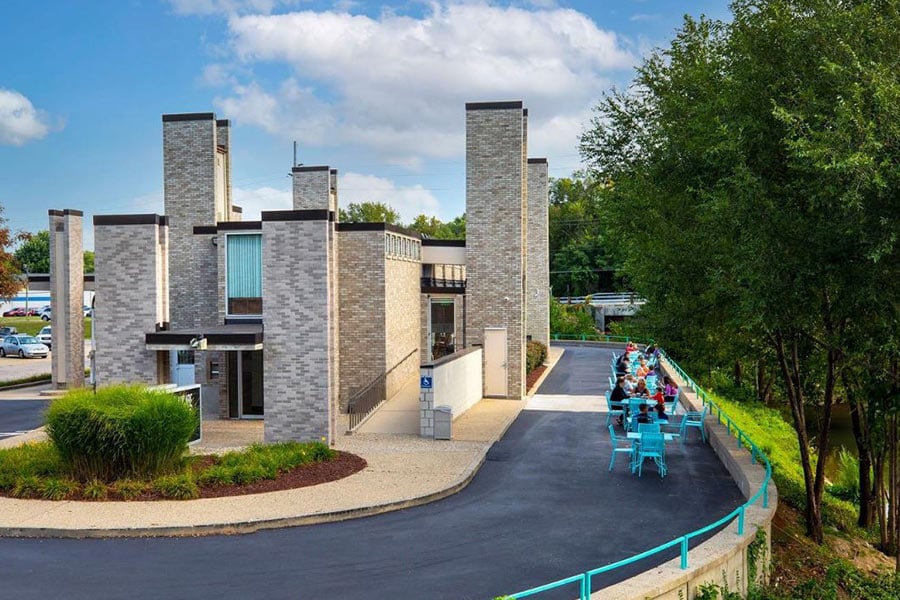 Just like the city of Columbus Indiana itself, the newest coffee shop is steeped with architectural significance and careful design preservation. In September 2021, the newest Lucabe Coffee Co. location opened in the original Irwin Union Bank and Trust, at Eastbrook Plaza.

The 5,000 square-foot, split level building was designed by the distinguished Chicago-based architect, Harry Weese. Preserving the celebrated design, the Lucabe Coffee Co. owners, Tyler and Alissa Hodge, have adapted the building from a bank to a coffee shop, while restoring the original structure’s character.

History of the Irwin Union Bank and Trust Building

Harry Weese was a modernist and a graduate of Cranbrook Academy of Art. The Irwin Union and Trust bank branch he designed was completed in 1961. Built with drive-through windows located on the original towers of the building, everything about this branch was automobile scale. Of the four towers, three featured drive-up banking windows and the fourth housed the night depository.

This building was a prominent, yet detached, part of the new Eastbrook Plaza, facing the Haw Creek on one side and the shopping center on the other. Intentionally placed, it was the third structure in a triangle formed by two bridges over 25th Street and US 31.

The gray-glazed brick exterior was chosen to reflect the bridge structures. Likewise, the bank towers are reminiscent of the piers from the original bridges. Appearing deceptively large from the side view, the building is actually narrow when viewed from either end. 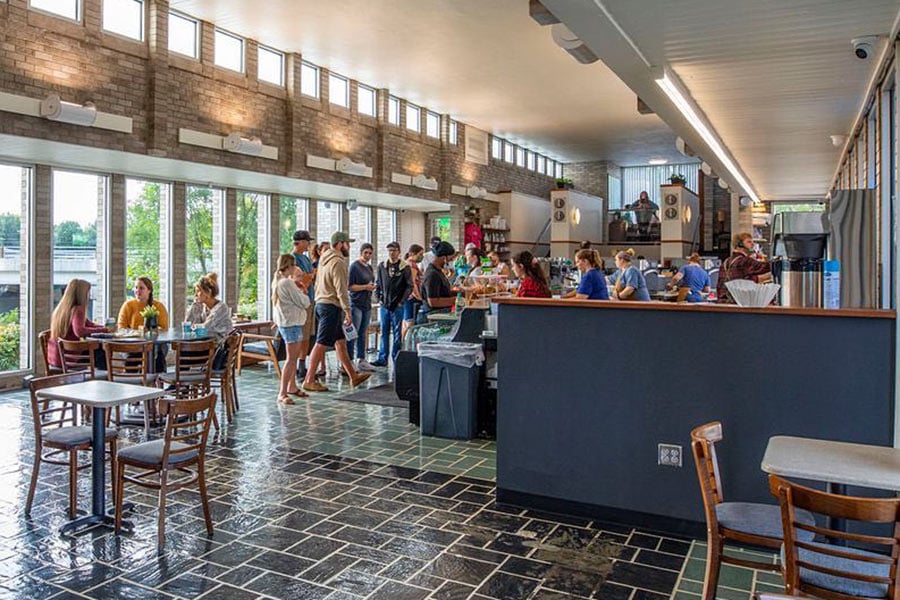 Adaptation from Cash to Coffee

In 2008, the Irwin Union Bank and Trust building became the First Financial Bank. However, it was vacated in 2020 and stood empty until Tyler and Alissa Hodge chose this special location to expand Lucabe Coffee Co.

The Hodges consulted with the Landmark Columbus Foundation and other design experts to adapt the location, yet preserve the history and architectural significance of the building. The original shiny gray slate floors have painstakingly been restored, after removing layers of carpet and stubborn adhesives. The window blinds have been removed to reveal the iconic tall windows and brighten the interior. The bank vault, including the door, remain intact, transforming it into a children’s play area with a climbing wall. Instead of serving up cash, the teller counters are now the barista stations where the caffeinated magic happens.

Like every construction rehab project, the Hodges encountered their share of surprises. They discovered leaks in the brick facade, and there was lingering water damage from the flood in 2008. Even so, the renovation continued, and today we can appreciate this renewed architectural treasure. 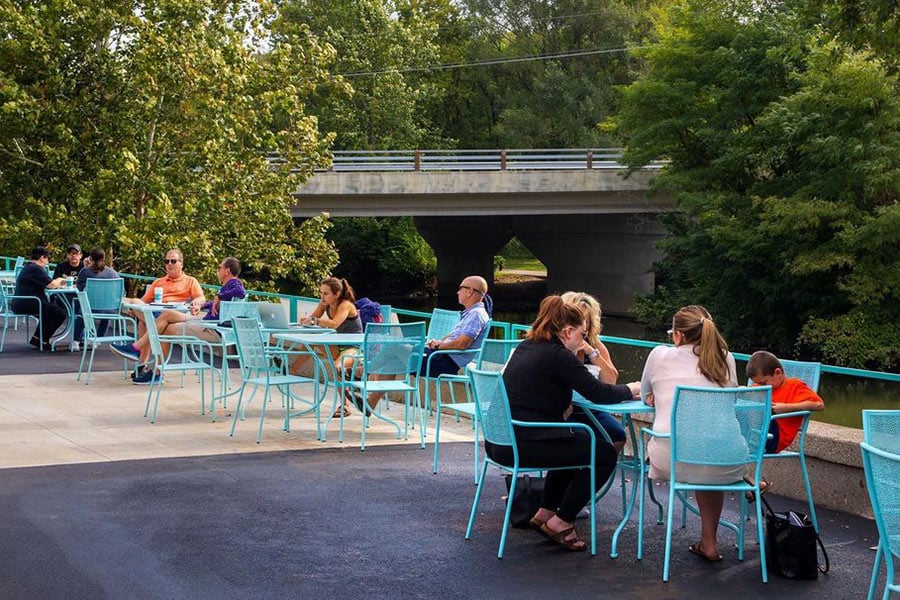 Lucabe Coffee Company describes its latest location On the East Side at the Bank. Because the building overlooks Haw Creek River along the Columbus People Trail, there is plenty of foot and cyclist travel. Trekkers and truckers are in luck. The drive-through windows have been restored, so customers can be served no matter how they arrive. The modernist design is enhanced by black, wood and grey elements that complement the mid-century design.

Without the blinds that were original to the building, the windows are more of a focus and showcase the scenic river views. Ample tables are situated both inside and outside on a riverside terrace.

Even though the menu includes yogurt, breads and pastries, the specialty coffee and homemade biscuits are the stand-outs. In fact, there is a good chance The Lucabe Build Yours Biscuit Menu will make its own history in this iconic building. 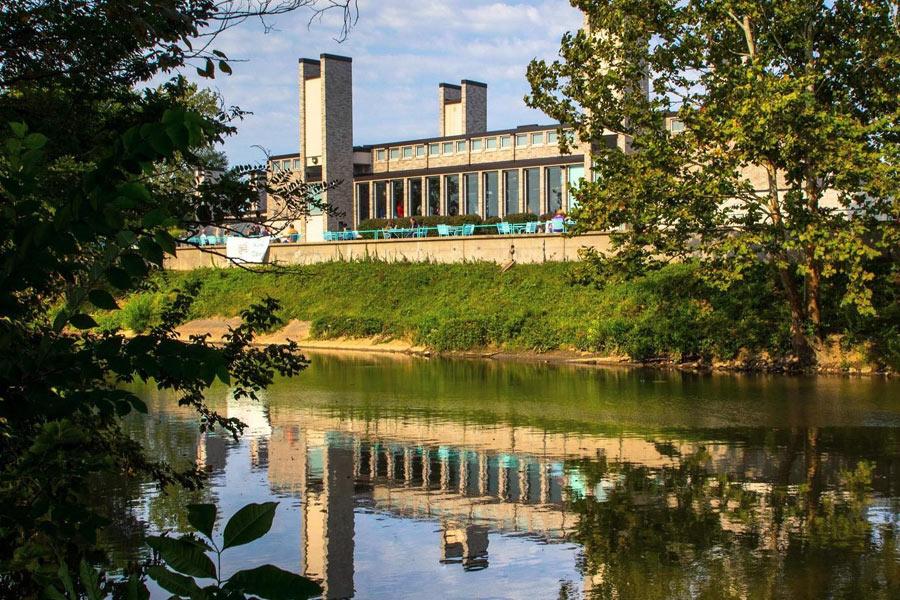 The Lucabe Coffee Co. mission is to serve Columbus Indiana with the highest customer care, the best specialty coffee and an amazing environment to gather community. Lucabe Coffee Co. is a perfect match for the city’s modern architecture and notable public art.

February is a great time to huddle with friends over a steaming cup and sample the soon-to-be-famous biscuits. Of course, it’s more than a satisfying cup of Joe. Living up to its mission, Lucabe is community, history and the appreciation of inspirational design. In addition to On the East Side at the Bank at Eastbrook Plaza, the original location is located at 310 Fourth Street, downtown. 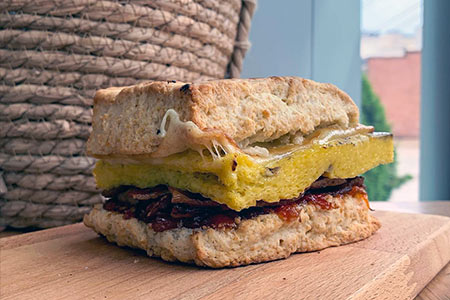 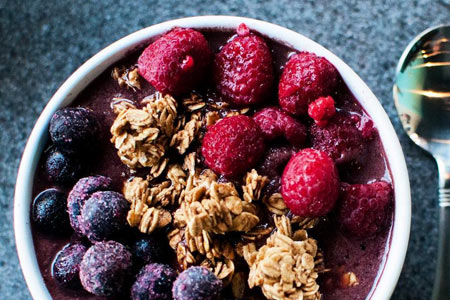