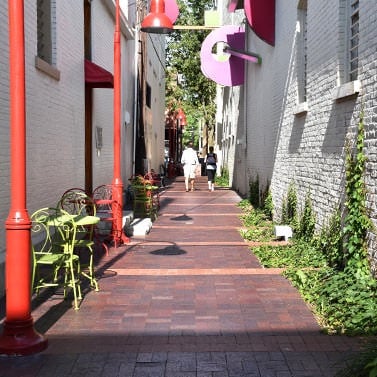 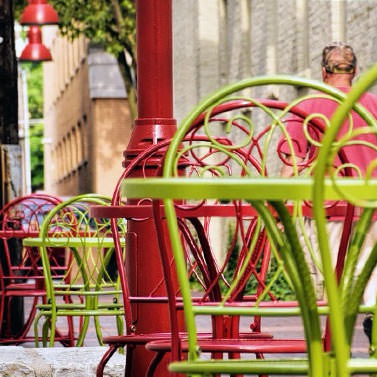 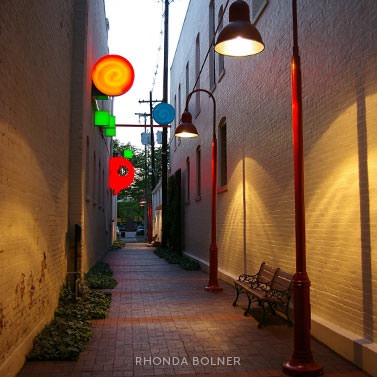 The pedestrian alleyway improvement program included the extension of the 1990 Streetscape project by adding a similar rhythmic sidewalk brick paving pattern, landscaping, and distinctive lighting. English ivy, an evergreen ground cover, is the predominant plant material. In the middle and end of the alley, flowering clematis and honeysuckle vines grow on trellises, with flowering perennials planted at the base of each.

The bricks that form the alleyway located between Fourth and Fifth streets were a gift from the citizens of Miyoshi, Columbus’ sister city in Japan, who contributed more than $35,000 through their purchase of named paving bricks for the project.

Called “Friendship Way,” the south wall of the alleyway features an animated neon sculpture that moves light and changes colors in circles, squares and lengthy tubes. A wooden bench provides a resting spot at the Washington Street alley entrance.

The project design and landscaping was by William A. Johnson.

Citizens of Miyoshi, Japan, the sister city to Columbus, purchased bricks with their names engraved on the path.

Hear artist Cork Marcheschi describe how jellyfish and sea anemones have inspired some of his glowing works of art. (3:15)

Return to the tour listings

See all the public art