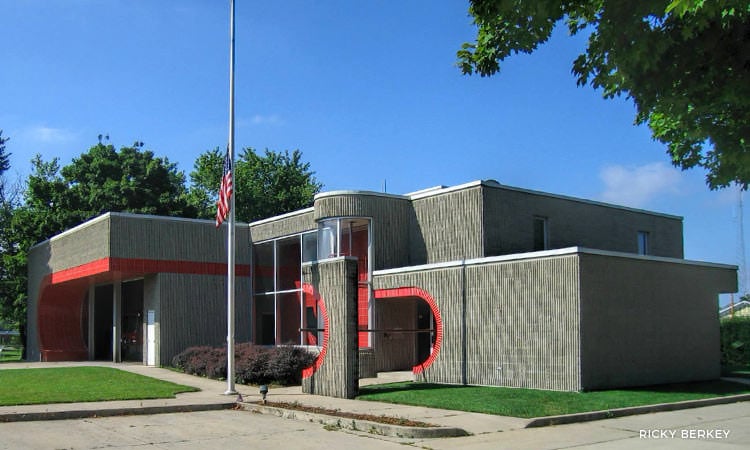 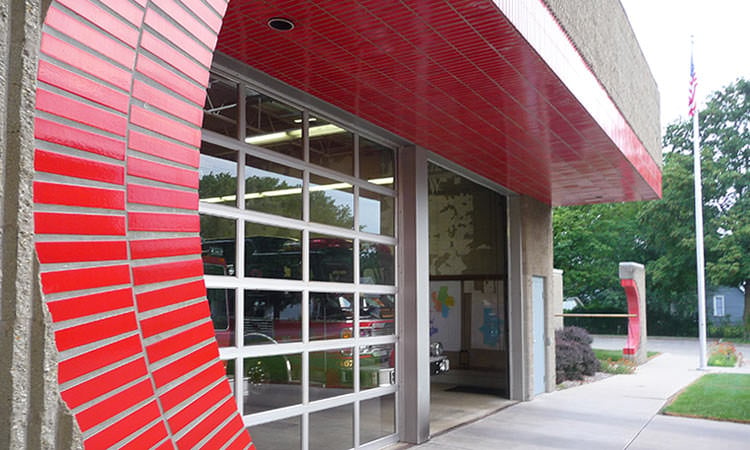 Burd is a Columbus architect who has designed several fire stations as well as other buildings around the area. This building was built in 1983 to replace a building very close to the site that had served the east side of town since 1950 (East Columbus was formerly a separate town). The exterior features bright graphics and large towers somewhat resembling the nearby Fodrea Elementary School. The two-story building has a hose drying tower in the rear and a glass enclosed tower in the front with a visible fire pole.

The architect thought it would be a playful touch to have a visible fire pole so the neighborhood children could run and watch the fireman sliding down the pole when they heard the fire alarm sounding. The fire pole is the main focal point of the design accented by the red brick and the “supergraphic” numeral 3 behind the glass front at the left of the fire pole.

A cylindrical form is repeated in the towers and horizontally at the main entrance and the engine bay doors. The curves at the entrances and engine bays are accented by the red glazed brick contrasting with the grey fluted masonry block walls. 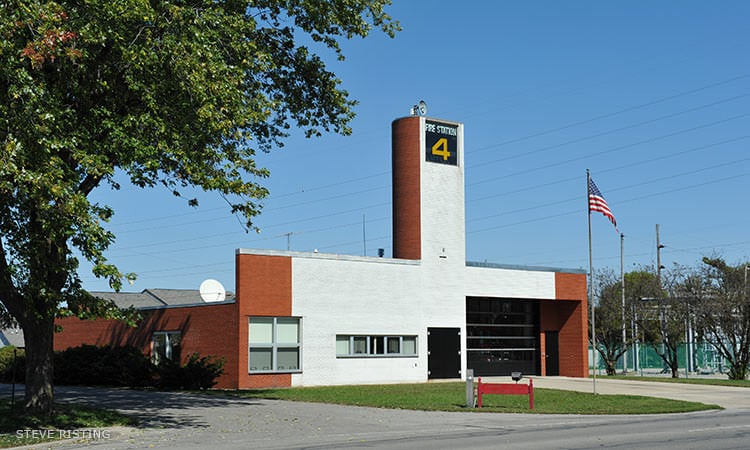 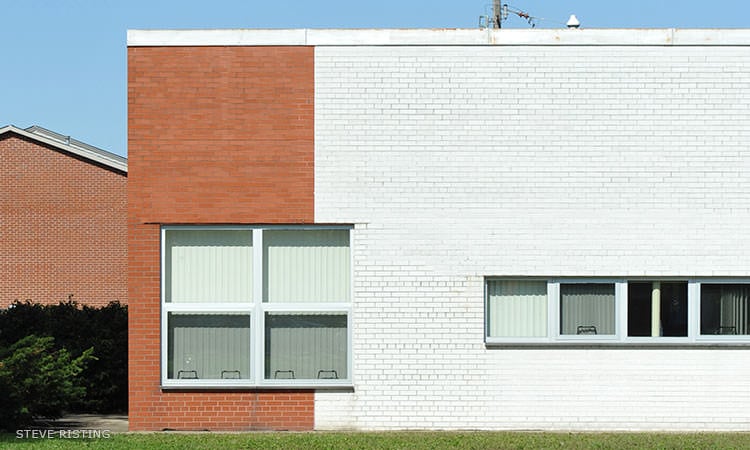 Robert Venturi designed the station in 1967 in a trapezoidal shape of cinderblock, white glazed and red unglazed brick and glass. The hose-drying tower provides a focal point in contrast to an otherwise low, utilitarian building. This was the fourth project Venturi completed. 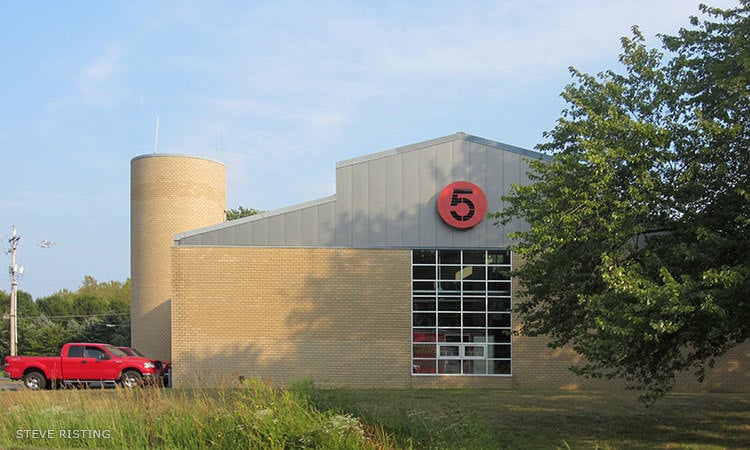 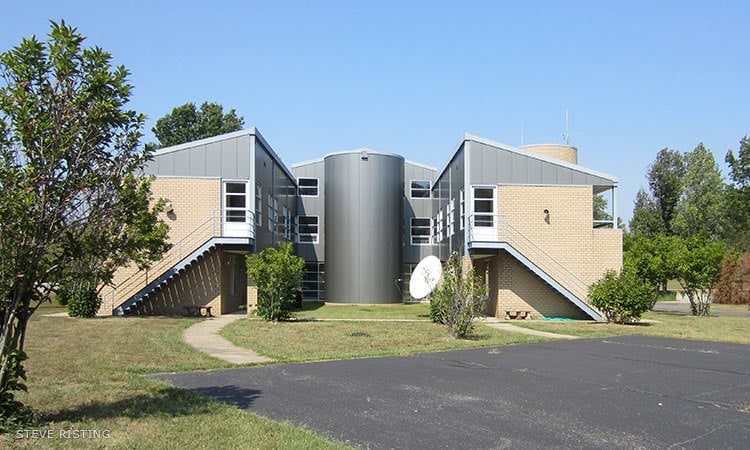 The first building designed by a female architect in Columbus as part of the Cummins Foundation Architecture Program, Susana Torre designed the station in 1987 as two overlapping squares. It is located on former farmland and close to and serving a rapidly growing residential area. These issues were resolved by using understated references to familiar rural symbols of silos and barns.

Information below is adapted from the Wikipedia listing for Torre…

Torre has devoted much of her professional life to theorizing the relationship of buildings to their physical and cultural contexts; and the way feminist concerns and cultural and regional identity can be expressed in architectural form and function.

Firehouse No. 5 was the first firehouse designed specifically to integrate women in the firefighting force. The design, which eliminated dorm-style sleeping and promoted bonding in the kitchen rather than the locker room, was adopted nationwide. While leaving the safety assumptions of the type intact, Torre’s building has created a typological invention through her challenge of program assumptions based on gender. It is a rare example of how a feminist perspective can alter both the spatial organization, influenced by social conventions, and the form of the building.

From SHE Magazine, Feb 2017…
Firehouse No. 5 references to barns and silos. “Her approach to design was looking at local cultural context,” local archivist Tricia Gilson says. “You see that with Firehouse No. 5. It’s really reminiscent of rural Indiana architecture.” But Torre, an academic whose designs are informed by her feminism, made a change with that project that firehouses all over the country use today. She replaced dormitory-style sleeping arrangements with individual bedrooms and made the kitchen the focus of group activities, thereby integrating women into the firefighting force.

Susana Torre was the first woman invited to design a building in Columbus. In 1977 Torre organized and curated the first major exhibition of American women architects, and edited the book Women in American Architecture: A Historic and Contemporary Perspective. The exhibition opened at the Brooklyn Museum in 1977 and traveled across the United States and to the Netherlands. Torre was born in a province of Buenos Aires, Argentina, the eldest of three children. Upon the death of her father when she was eight years old, the family moved to La Plata, near Buenos Aires, where she attended public schools until beginning her studies for the Dipl. Arch. at the Schools of Architecture and Planning, Universidad de La Plata and Universidad de Buenos Aires, which she received in 1968. In 1972, Torre joined the faculty of SUNY at Old Westbury, NY, where she developed the Art Department’s first design curriculum. In 1978, she established The Architectural Studio in New York City. One of her first projects in New York, the Law Offices of art collector Harry Torczyner, was selected by the American Institute of Architects as one of the seventies’ memorable spaces.

Among her best-known projects are Fire Station Five in Columbus; the Ellis Island, New York Harbor, park proposal; the Clark and Garvey Houses in The Hamptons, New York; the Schermerhorn Hall renovation for Columbia University, and the Consulate of the Ivory Coast in New York City. In 2008, she completed the residential community of seven seafront houses where she now lives with her husband, writer and sociologist Geoffrey E. Fox, in Carboneras, Spain. 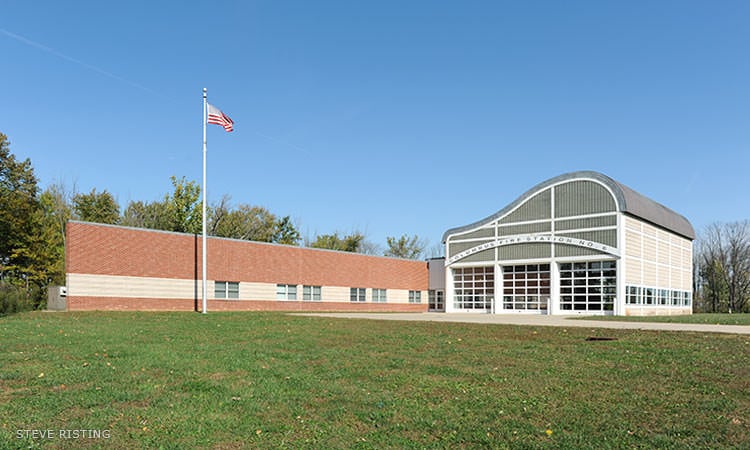 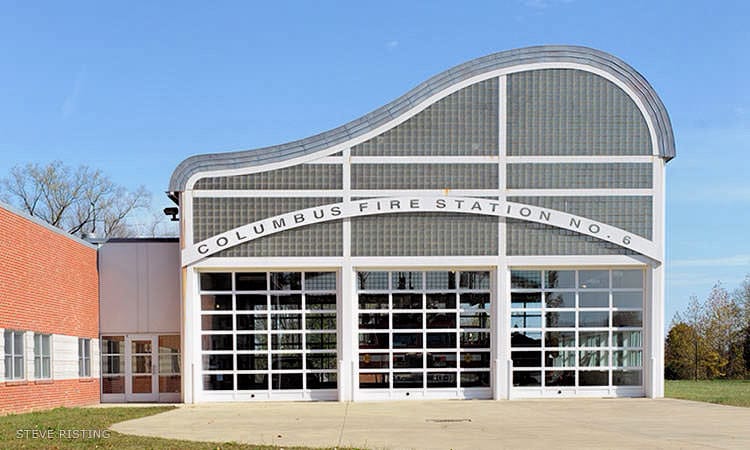 From William Rawn’s website :
For fast-moving traffic, the east and west facades boast distinct glass grids that face up and down the highway. The south facade, parallel to Indiana Highway 450 South, is a solid skin of concrete masonry resembling stone with a continuous 4- foot-high horizontal strip window. In the daytime, the glass block takes in the same coloration as the stone elevation. At night, the building is a beacon, as its glass facades and horizontal strip window glow from within.

The project received the 2000 Honor Award in Architecture from The New England Chapter of AIA and the 2001 Honor Award for Design from The Boston Society of Architects. 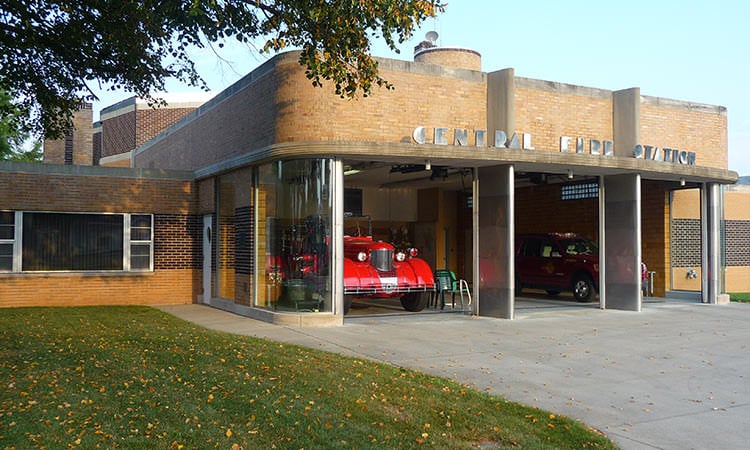 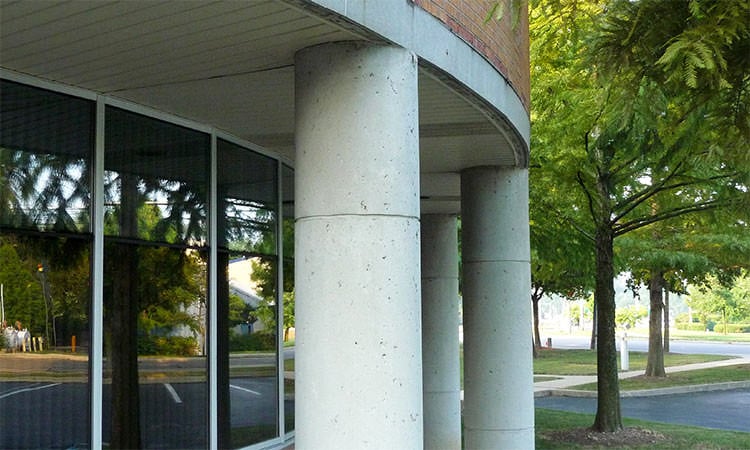