Panorama photo of Jean Tinguely’s Chaos I, by Thomas Schiff

Chaos I, by Jean Tinguely 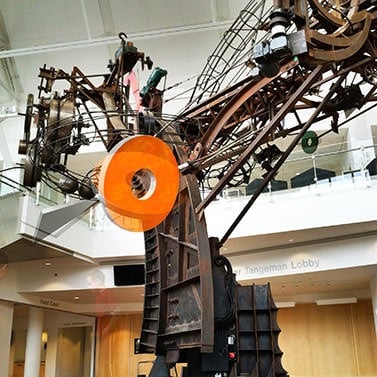 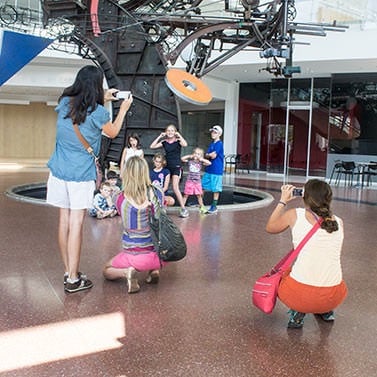 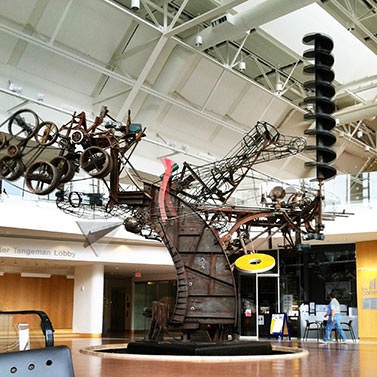 Learn more about Chaos I

Chaos I is a seven-ton kinetic (moving) sculpture by Swiss artist Jean Tinguely (1925-1991). The thirty-foot tall piece is the largest and most important work by Tinguely in the United States.

Tinguely, a colorful character sporting a bushy moustache, took up residence in Columbus’s former city powerhouse near Mill Race Park for nearly two years from 1973 to 1974. Locals have wonderful memories of the artist-in-residence. Tinguely became a regular at the local “watering holes” during that time.

Chaos I cycles through a series of motions to simulate a day in a life, beginning slowly at first, adding movements and then winding down again. At the peak of its chaotic movements, steel balls roll and crash through a caged track, making a ruckus.

So special is Chaos to the community, for the three years that the new Commons was being constructed, it was safely protected in a climate-controlled box while The Commons was razed and rebuilt all around it.

The architect of the original Commons, Cesar Pelli, first suggested to J. Irwin Miller, CEO of Cummins Engine Co., that a sculpture by Tinguely would be the perfect centerpiece to this downtown facility. Pelli said, “We would like a great magnet, a focal point such as the old town clock…a place for people to meet and greet one another.”

The work was commissioned by J. Irwin and Xenia Irwin Miller and Clementine Tangeman in late 1971. 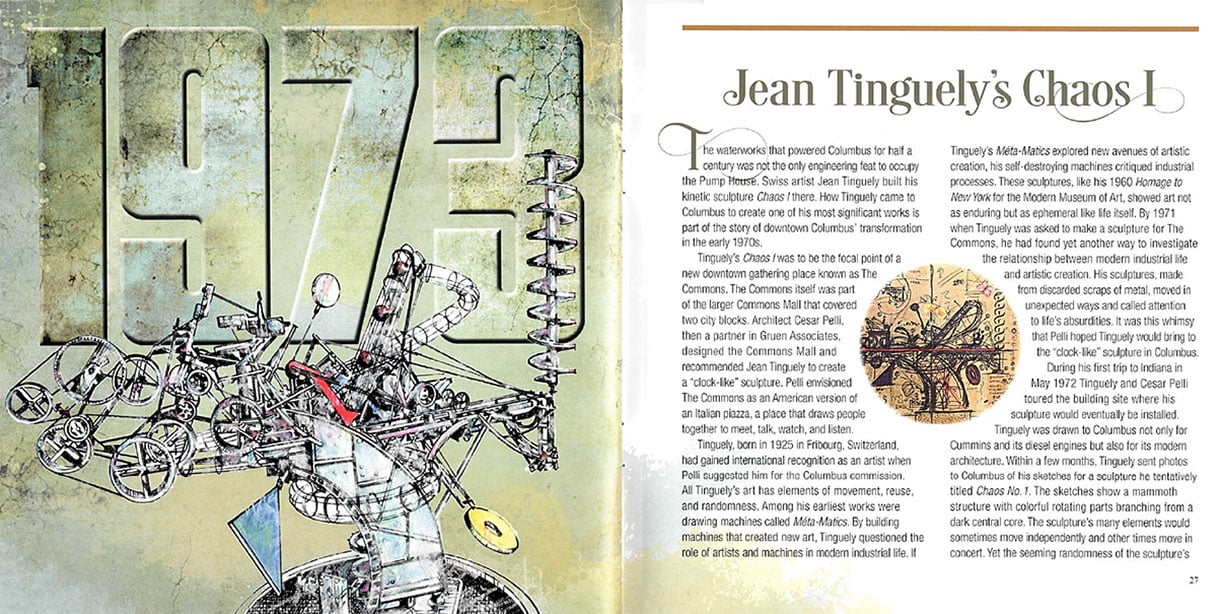 Read the story of Jean Tinguely’s Chaos I from the Columbus Pump House preservation book (opens a new window).

The waterworks that powered Columbus for half a century was not the only engineering feat to occupy the Pump House. Swiss artist Jean Tinguely built his kinetic sculpture Chaos there. How Tinguely came to Columbus to create one of his most significant works is part of the story of downtown Columbus’ transformation in the early 1970s.

Tinguely’s Chaos was to be the focal point of a new downtown gathering place known as The Commons. The Commons itself was part of the larger Commons Mall that covered two city blocks. Architect Cesar Pelli, then a partner in Gruen Associates, designed the Commons Mall and recommended Jean Tinguely to create a “clock-like” sculpture. Pelli envisioned The Commons as an American version of an Italian piazza, a place that draws people together to meet, talk, watch, and listen.

Tinguely, born in 1925 in Fribourg, Switzerland, had gained international recognition as an artist when Pelli suggested him for the Columbus commission. All Tinguely’s art has elements of movement, reuse, and randomness. Among his earliest works were drawing machines called Meta-Matics. By building machines that created new art, Tinguely questioned the role of artists and machines in modern industrial life. If Tinguely’s Meta-Matics explored new avenues of artistic creation, his self-destroying machines critiqued industrial processes. These sculptures, like his 1960 Homage to New York for the Modern Museum of Art, showed art not as enduring but as ephemeral like life itself. By 1971, when Tinguely was asked to make a sculpture for The Commons, he had found yet another way to investigate the relationship between modern industrial life and artistic creation. His sculptures, made from discarded scraps of metal, moved in unexpected ways and called attention to life’s absurdities. It was this whimsy that Pelli hoped Tinguely would bring to the “clock-like” sculpture in Columbus.

During his first trip to Indiana in May 1972 Tinguely and Cesar Pelli toured the building site where his sculpture would eventually be installed. Tinguely was drawn to Columbus not only for Cummins and its diesel engines but also for its modern architecture. Within a few months, Tinguely sent photos to Columbus of his sketches for a sculpture he tentatively titled Chaos No.1. The sketches show a mammoth structure with colorful rotating parts branching from a dark central core. The sculpture’s many elements would sometimes move independently and other

In October 1972, Tinguely returned to Columbus for just one day to meet with Pelli, board members of the Civic Mall (as The Commons was called) as well as with J. Irwin and Xenia S. Miller. J. Irwin Miller, chairman of Cummins Engine Co., together with his wife Xenia and sister Clementine Tangeman, gave The Commons and Tinguely’s sculpture to the City of Columbus. During this trip, Tinguely inspected the Pump House and its cavernous space behind the Redevelopment Commission’s offices that would become his studio. Tinguely described the sculpture’s appearance and personality: “This machine should be able to have two faces. One way coexisting with the situation of the city mall and the other fighting against all and making noises, being fast, being very confusing in a way and then… back to the quiet life of being a good sculpture again… A sculpture like Dr. Jekyll and Mr. Hyde.”

In March 1973, Tinguely and his assistant Josef “Seppi” Imhof began making the sculpture in the Pump House. Tinguely would find in Columbus both the materials and expertise needed to create his most important sculpture outside Europe. Gathering materials for Chaos I, Tinguely scavenged for scrap metal at Kroot Corporation, a local scrapyard. He relied on Noblitt Fabricating to make many of the turning pieces that project from the sculpture’s trunk. To enable Chaos I to pivot at its base, Southern Machine Company provided a bearing more than 5 inches in diameter. Because Tinguely wanted each of the sculpture’s moving parts to be able to operate independently and at different speeds, each part required its own motor. The sculpture’s 12 electric motors were manufactured by Reliance Electric and supplied by Daniel-Hayden Electric Company. Nearly all the motors required modification so they could turn the sculpture’s moving parts at the speed Tinguely sought. To modify the motors and to program the sculpture’s electrical panel, Tinguely turned to Verl Mauzy, an electrical engineer who worked for Daniel-Hayden.

After building much of the sculpture in the Pump House, the 30-foot tall, 7-ton sculpture had to be disassembled in order for the Columbus-based Machinery Moving, Inc. to transport it to The Commons on February 5 and 6, 1974. Putting Chaos I back together again would take Tinguely several weeks, but he continued to refine its parts and calibrate its movements until shortly after The Commons was dedicated at the end of May 1974.

Though much of the Pelli-designed Commons was demolished in the winter of 2008 and the new Commons designed by Koetter Kim was built in its place, Chaos I continues to move and delight in downtown Columbus. It stands as a testament to Tinguely’s creativity, to Pelli’s vision, to the generosity of the Miller and Tangeman families, and, importantly, to Columbus’ history of engineering and design innovation.